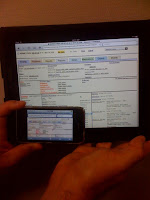 A great followup from last week's Cool Technology of the Week about the use of the iPad in healthcare. Thanks to Dr. Henry Feldman for the answer.
Question: Quick questions, the iPhone 4 is supposed to come out soon. Is it much better that the iPhone 3 phones? Also what makes the IPad so much better than just a regular lap top except the battery life and weight? Also, could I not just use an iphone in the same way you use the IPad? Are you still handwriting your notes or are you typing them into the IPad as you pre-round? Was it easy to write admit notes in the POE d/c summary with the Ipad?

Answer: When the iPad shipped everyone accused it of “just being a big iPhone” and now ironically the iPhone 4 is “just a small iPad”. I handwrite my progress notes [I find I think more about what I’m going to say], but type my admit notes (and do my own admit letters as I like to write a full descriptive letter to the PCP)

1. So what are the differences between the iPhone 3GS and the 4:
Speed: the iPad/iPhone 4 processor (the A4) is much faster than the prior ARM processor that was there before in the 3GS. You would not think you care, but you do, as particularly on a phone, lag during user interaction is annoying, and for things like turn-by-turn navigation unacceptable. Most literature places click-lag beyond 0.1 seconds as being annoying to users. Ironically with a much faster and more powerful processor, since it is physically smaller, they were able to jam a larger battery in there and so it lasts longer.
Screen: From all the online reviews, the “retina display” which has 4x the resolution is truly amazing, and shocking in its realism. This will be particularly good in email, where sharper text will increase contrast and readability. The online reviews of folks who played with them at WWDC said it was like looking at a photograph/page of text
Weight/Size: I never considered my iPhone large, but this new one is smaller
Keyboard: the iPhone 4 will support external keyboards like the iPad
Camera: way better. Just way better (not a lot more megapixels, but that’s a stupid measure of camera quality)l low-light performance, finally has a flash, records HD video, and of course has front facing camera for video calls

2. iPad vs. Laptop
Time to working from the off state: On an iPad it is well under a second from when you open/turn on to when you’re working, the best netbooks take 10 seconds. This is also helpful for roaming on the secure network (a netbook while asleep loses its connection, the iPad matains it)
Ability to work walking down the hall/Bedside: I wrote orders/browsed while walking around, in the elevator, on the stairs, etc. I can’t think of any ergonomic situation where I could use a laptop like that. They simply aren’t designed to be used on the go. If I’m already sitting at a desk then we have computers there. Having to search for a surface to work on defeats the purpose
Battery life: 4 days vs. 6 hours, ‘nuff said
Speed: The processor in a netbook is much less efficient, and having a real HD (or a large SSD), etc, even with the large battery packs which last 6 hours and add a pound, aren’t even close to the speed of the iPad. The iPad isn’t designed to be a general purpose computer per se (it’s actually a mac running a subset of Mac OSX, like the iPhone, under the scenes) so much of the overhead that exists on Windows, Linux or Mac OSX isn’t necessary when walking around. This all kills speed. In fact for web page rendering and rich emails, is actually even faster than my monster 8-core Mac Pro. It opens OMR pages instantly (faster than the desktops on the wards for instance)
Weight: Let’s take a typical netbook (nobody would walk around with a full sized notebook) such as a Dell Mini 10, which with a 8-9 hour battery life weighs 3 pounds (doesn’t sound heavy, but walk around with a 3Lb object all day and you’ll be beat, and you’ll notice that it wouldn’t last an entire night shift for all that weight (so you’d have to remember to bring a charger). The iPad for comparison weighs 1.5Lbs and lasts up to 4 days without charging. The iPad is also 0.5” thick, while a Mini 10 is 1.3 inches (doesn’t sound like a lot, but that’s a huge difference in carrying something for 12 hours)
Interface: Windows, Mac OSX or Linux is really designed to be used with a mouse/trackpad with multiple mouse buttons and is designed to be a full featured computer. You won’t be writing software, building 3D models or such while walking around, so a touch/multigesture interface is much more efficient (just pointing at the tab you want in OMR is way more efficient particularly in 1 handed mode while standing than scrolling around with a track pad). Of course if you want to use a full keyboard, the iPad does support it (I never used mine the entire week). The keypad in the iPad in landscape mode is the same size as my HP Mini 311 keyboard (yes, I do own a PC for programming a specific device), both are OK for typing, but as a touch typist for long documents I like a full 102-key keyboard, with full sized keys
Email: The iPad/iPhone have full push email/Calendar/Contacts from Exchange, which you only get on a PC with a full copy of office with Outlook

3. Iphone vs. iPad:
You CAN do everything on an iPhone that you can do on an iPad as they are the same thing with a different screen size. That being said, the zooming in/out gets tiresome REAL fast. If you need to put in a quick tylenol order while in a meeting, then yes it works. Anything longer than that, painful just due to the size. See the enclosed picture below of the same Kermit the Frog screen up on OMR, but I’m too old for seeing those small links/text, and my fingers are too big.
Of course you can’t make phone calls on an iPad (well you can but only via Skype, which actually works quite well)
No text messaging even on the 3G iPad
Doesn’t fit in a pocket (well depends on your fashion, but I don’t have 10” pockets), but the tradeoff is lots of zooming

4. Notes on the iPad:
I didn’t write the bulk of the admit note on the iPad. I did my chart biopsy in the nurses station with the paper chart in front of me into the DC summary, and typed the bulk of the stuff in with a real computer. This isn’t because the iPad couldn’t do it, it’s just way easier on a full size keyboard and a mouse/draggable windows interface is helpful for bulk cutting-and-pasting (cutting and pasting one thing is fine on an iPad, but all sorts of things from many sources becomes inefficient). So when I walk into the room it’s 85% done, and then I complete it right there in the room (vitals, physical exam and updating the HPI with info from the patient). This was very efficient.
I did do multiple DC plans on the iPad and that worked quite well, although since the iPad is not linked into the ITS Domain as a “clinical workstation” nothing prints, so for the Page 1, etc you need to finalize it on a clinical desktop (but this would be true of any non BIDMC PC, such as a laptop).

5. Rounding/POE
I found that when I left the person’s room the bulk of their orders were in, and lytes were corrected, diet advanced, etc all at the bedside. Patients also ask about their labs, etc, and having them right there in real time (printing them via the PTC doesn’t work at 6:30 as they aren’t back yet), so that was helpful
Patients loved seeing their ERCP reports, and between those pics and the Netter’s I have on my iPad (and iPhone) it made procedures very understandable
Handling the nurse snagging you in the hall for a coverage issue, etc was way better, as on the chaos of last week it was easy to get distracted and forget if you didn’t handle the problem then if it was some minor issue.
Posted by John Halamka at 3:00 AM

Thanks for the in-depth Q & A, it's helpful to hear about how these technologies are being used "in the field."

wow. thanks alot for the "road-test" and side-by-side comparison doc. It's really helpful to get in-depth reviews of new product usage in real life. Great blog! great articles! keep up the good work!