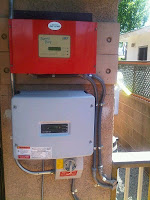 Over the weekend, while in Los Angeles visiting my parents, I had the opportunity to visit the Torrance, California home of Mary and Al Shadbourne who have embraced a do-it-yourself approach to Green living. Here's what they've done:
In 1983, they installed a passive thermosiphon solar hot water heating system which they converted to an active system in 1994. The cost for the original system was $5000.
Their natural gas bill is $302 per year, including 7 months with a bill under $12.
In 2003, they installed 219 square feet of AstroPower solar photovoltaics which cost $10635 after rebates and have a payback period of 12.9 years based on the current cost of energy from Southern California Edison.
The average power generation has been 8.8 kilowatt hours/day. Their home power consumption has been'
2007 13.6 kwh/day (65% solar generated)
2008 16.9 kwh/day (55% solar generated)
2009 16.2 kwh/day (54% solar generated)
Their power bill has averaged $35 per month.
In 2009 they
*added ecofriendly Orco permeable pavers to their driveway, which minimizes water run off into the street, keeping their local soil moist and reducing contamination of public draining systems.
*installed a rolling shutter system on the south and west facing windows which keeps heat out of the house on summer days (and increases sleep time by keeping bedrooms dark)
*installed TREX decking made from recycled wood and plastic, reducing their rear lawn size
*installed a retractable awning over the rear deck which keeps their outdoor areas cool
*reduced their front lawn size by replacing it with raised beds and mulch. The end result was a 48% reducing in water consumption
*Added a Solatube to bring the light of the sun directly into a windowless bathroom, eliminating the need for lights during the day.
In 2010 they
*installed 168 square feet of Sunpower solar photovoltaics at a net cost of $10,300. They are currently generated 15.44 kilowatts/day. Their electrical meter is running backwards and Southern California Edison will be paying for the electricity they add back to the grid
*installed rain barrels to collect rain from roof run off
*installed a hot water recirculation system
*installed a TIGO power maximizer system on the AstroPower photovoltaic array. This system automatically monitors each module and ensures that resistance/voltage is equalized throughout the system. This is important because a single module in the shade can reduce performance of the entire system by increasing resistance. The TIGO system can improve power yields up to 40%.
The combination of solar hot water, photovoltaics, insulating window treatments, reduced water use, and solar lighting is a great accomplishment, but they've gone further by really thinking about how to manage temperatures in their home using the weather variation of the day in their favor.
They installed SolarStar attic ventilation, which is entirely solar power venting.
They have an amazing "entire house" fan system built into their hall ceiling which enables them to open all the doors and windows and pull cool evening air throughout the house, venting the heat of the day.
To maximize the efficiency of these systems, they have installed new modular insulation in their attic, covering the existing fiberglass insulation and avoiding the mess of spray on insulation. This makes the attic a very friendly place to work in if they need to service any of the roof mounted electrical or ventilation equipment.
Mary and Al have great passion for what they do, volunteering their time for community and high school environmental education events. Their passion is infectious and I hope to implement some of their ideas myself over time.
Posted by John Halamka at 3:00 AM

It sounds great (especially the part about the power company paying them back). You listed the net cost in dollars, but I'm wondering what the time cost was in all this: did they install these systems themselves, or pay someone else? For the average person, time is as much a consideration as money in considering improvements like these.

The work was done by Ameco