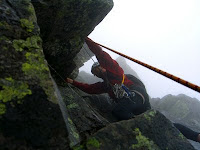 As I recently described in my Into the Wild blog entry, I spent a few days last week in New Hampshire with family. Every hike and climb I do is filled with lessons learned that make me a more responsive CIO.

Here are a few of my experiences.

On Monday, I expected to climb the Whitney Gilman ridge on Mt. Cannon in Franconia Notch. Unfortunately, we've had a very rainy July in New England, filled with pop-up thunderstorms. Monday had a 70% chance of Thunderstorms in the Franconia area, which is well known for its uniquely bad weather. Alpine mountaineering is often a race against bad weather, requiring pre-dawn starts and early afternoon descents off the mountain before afternoon thunderstorms put the climbers at risk. On most climbs there is always the possibility of retreat, which is part of the trip planning. Whitney Gilman has a lot of loose rock, no bolted anchors for rappeling, and is bordered by the 1000 foot 'black dike', a wet, mossy abyss. There is no retreat from this climb.

In my blog about risk, I described the Morts involved in each of my activities. Risk in my view is the likelihood of a bad event times the consequences of the bad event. Climbing a 1000 foot rock face without a possibility of descent with 70% thunderstorm risk in an area known for very bad weather, created a level of risk that I judged unacceptable. Summitting the mountain is optional, returning to the car is mandatory. I elected to skip all climbing and hike at low elevations on Monday.

The weighing of risks and benefits, evaluation of contingencies, and triage of all available options is something a CIO must do every day. Using my CIO behaviors in the intense world of alpine mountaineering makes me a better climber and visa versa.

On Tuesday, I climbed the Pinnacle Buttress (8 pitches, 5.8, picture above) to the summit of Mt. Washington. Although 5.8 climbing is only moderately difficult, the week of thunderstorms had created a thin sheet of moss over the entire climb, making handholds and footholds very tenuous. There were two options - become overwhelmed by the poor climbing conditions or just focus, trust myself and move to the top step by step. Often, when doing projects as a CIO, the politics, limited resources, software quality issues, and changes in scope can be very daunting. By focusing on the task at hand, realizing there is a process for everything, projects eventually succeed. Apply the same patience and perseverance I use in climbing to my work as an IT leader makes me a better CIO.

On Thursday, I hiked Mt. Monadnock from each compass direction, doing 4 ascents over the course of the day. On my final descent, I passed a gentleman who was moving slowly with his two young children, one 5 and one 8. The five year old was quite tired and having difficulty with the trail. The 8 year old asked her father which direction to go and he told her to follow me as I seemed to know where I was going. She took this as a command and ran down the mountain with me for 3 miles. It was 6pm, most hikers had left for the day and I was alone with an 8 year old girl I did not know, who was probably going to have to wait 2 hours for her family. I accepted responsibility for the situation, ensured she was fed and hydrated, then explained the situation to her. We walked to the Mt. Monadnock State Park headquarters where I filled out an incident report, asked the state park rangers to supervise her, gave them all my contact information, and asked them to followup. At 11pm, her father called me to say that the family was down the mountain, reunited and all was well.

By accepting responsibility for situations that are often not caused by me or are beyond my control (whether in the office or in the wild), I can ensure the satisfaction of all stakeholders.

A great vacation in New Hampshire. My next excursion into the wild begins on August 8 with the John Muir trail.
Posted by John Halamka at 3:00 AM