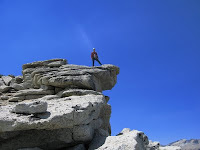 In Jon Krakauer's novel Into the Wild, Christopher McCandless shrugs off the trappings of conventional society and seeks adventure on the road like a modern day Jack Kerouac. He ends his Journey in Alaska where he spends 100 days alone in the wilderness and dies by consuming poisonous plants (or the poisonous mold growing on the them).

I'm a bit more conventional than Chris McCandless but the notion of going into the wild to recharge your body and invigorate the mind is a good one.

Here's my schedule for going Into the Wild this summer, which will explain a few gaps in my blogging days:

July 21 - Ascent of Whitney Gilman Ridge (5.7) on Cannon, Franconia Notch, New Hampshire. Every year in July, I ascend Whitney Gilman, the classic alpine climb in New England. The climb rises 2000 feet above highway 93 near where the Old Man of the Mountain recently fell off Cannon mountain. The challenge of climbing on Cannon is that the rock is exfoliating granite, which, like the Old Man, tends to fall off over time. The route is known for the "pipe pitch", where a lack of places to place protection led the first ascent party to hammer a pipe in a crack to support their ropes. On the pipe pitch you stand on a 6 inch square of rock looking down 1000 feet into the Black Dike, then you make a few gymnastic and strenuous moves to pull your body over a ridge by your fingertips. Needless to say, I will not not be bringing my Blackberry.

July 22 - Ascent of Pinnacle Buttress (5.7) in Huntington Ravine to the top of Mount Washington. Pinnacle is another classic climb in New England, known for its particularly challenging and strenuous Allis Chimney, two vertical walls of rock with few hand and foot holds.

July 23-25 For the past ten years, my family has stayed at a local farm, East Hill in Troy, New Hampshire during the last full week of July. East Hill is at the base of Mt. Monadnock (elevation 3165 feet), the most climbed mountain in the United States. Each day that we're at East Hill, I ascend the mountain 4 times, once from each compass direction via the Dublin or Pumpelly trail (North), White Cross or White Dot (South), Birchtoft trail (East), and White Arrow (West) trails. I play my traditional flutes while on the trail, creating an echo of haunting music that traverses the canyons and forests of the mountain. This year I'll play the Japanese flute, the Anasazi flute, and the Woodlands Native American flute.

August 8-11 My own version of the Chris McCandless adventure, I'm walking 100 miles on the John Muir Trail over 4 days. 25 miles per day is an aggressive schedule which requires that I travel fast and light. My gear list ensures my pack about 15 pounds during the entire trip. Since all my food will be vegan, I do carry a bit of extra weight given the reduced calorie density of lentils, rice, and dried beans. During these 4 days, I will not have access to a cellular signal.

August 12 Ascent of Mt. Tenaya (5.6 variations) in Tuolumne Meadows. Tenaya is an extraordinary climb with 18 pitches of high quality granite overlooking Tenaya Lake in Yosemite. Last year, a trick of the light made the summit (picture above) look like heaven was shining on me (no photoshop used).

August 13 Ascent of Cathedral Peak (5.8 variations) and Eichorn Pinnacle (5.9) in Tuolumne Meadows. Per my New Year's resolution, I'll be playing a Japanese flute concert from the summit. Barry Higgins, a master flutemaker , has agreed to build me a special Shakuhachi for climbing made of "Urban Elderwood" otherwise known as PVC pipe. He made my Anasazi flute and I'm confident his PVC Shakuhachi will be extraordinary.

August 14 Hike up the Tioga Crest. At 13000 feet, the Tioga Crest overlooks Saddlebag Lake, Tioga Pass, Mt. Dana, Ada Lake, Mt. Warren, Mt. Gibbs, and Mt. Scowden. I'll follow old mining switchbacks to ascend the crest near the TipTop and Summit Mines. The Summit is still filled with the beds, clothes, and work table from 19th century miners. It's so hard to reach that no one has touched their belongings.

August 15 Ascent of North Ridge of Conness (5.6). Mt. Conness has a two classic climbs - the West face (which I did last year) and the North Ridge. It's a long day of climbing (15 hours car to car), with a highly exposed knife edge ridge leading to the summit.

For all my friends in the Blogosphere, my staff, the folks at the Poison Control Center who work with me on mushroom ingestions, and my customers, these are the days this year I'll be slow to the respond.

And now I go into the wild.
Posted by John Halamka at 3:00 AM

I stumbled across your blog via Beth's Blog. I enjoy reading it. I commend your travels into the wild. I think we all need it every now and then. I just came by from Olympic National Park, heaven!

Ever sit in Thoreau's Seat or Ainsworth's seat on Monadnock? I have climbed that Mountain at least 200 times and tried to mountainbike down it twice. Love the Presidentials too for the climbing and great spelunking as well. Have fun!

Mark - I sat in both of them this week! The highlight was hiking Birchtoft to Red Spot in Thursday's Tornado conditions. First time I've had to crawl to the summit to avoid flying off the top.

That must have been a thrill like no other. I used to hike up there on July 4th and watch the fireworks from half a dozen towns at the same time - not to be missed.

Hey I wanted to put something on your radar - http://www.vyatta.com. It's an open source firewall product that costs $2K and will go up against a Cisco 7200 on a 486 box. I have been playing with it at home and it's slick...