Wedding plans have occupied much of this week at Unity Farm, ensuring that my daughter’s marriage weekend has perfect logistics.    A wedding on a farm is more challenging than you think - how do you prevent flying guinea fowl from leaving “gifts” on the guests?   Should the pigs be moved to minimimze squealing during the ceremony?   How do you prevent chickens from eating the flowers?   We’ll be serving Unity Farm foods and beverages, accompanied by vegan/vegetarian catering.   The family begins arriving tonight.

This week, another goose,  Hermes, was born.    Our weather has been very unusual and we’ve had a series of nights with temperatures in the 30’s.    Hermes was wet and chilled while hatching and became hypothermic.   We warmed and dried him in the incubator then placed him in the brooder.     He was so weak that he could not stand/walk and had splayed legs

We’ve treated splayed legs in guinea fowl before so we knew how to make a brace, keeping the femurs aligned so that the hip joints would not develop laxity.  It’s critical to intervene on the first day of life, otherwise the bird will never walk.  With the brace in place, fresh food/water, and physical therapy every few hours, Hermes gathered strength and today he is walking.   We’ll return him to the goose house today or tomorrow.    We named him Hermes because we knew he’d heal and become a swift runner through the barnyard.

Now that we have so much produce production, we’ve had to improve the efficiency of our harvest and packing operation.   We built a wash stand so that vegetables go from raised bed, to washing, to packaging, to farm stands in minutes.      On Sunday morning, before anyone in the wedding party is even awake, we’ll be delivering lettuce to Tilly and Salvy’s.

In between wedding planning and project work, Kathy has been hard at work on bee hives this week.    It’s the time of year when bees tend to expand their territory and she’s been called all over the Metrowest area to capture swarms.    Unity Farm is the temporary home to many new colonies this week since Kathy has been climbing ladders, cutting swarm covered branches and placing them in “nuc” boxes.     She’ll be creating more hives and spreading the bees among the many hive hosting locations she’s now managing.     We’ll likely end up with 25 hives by the end of the season. 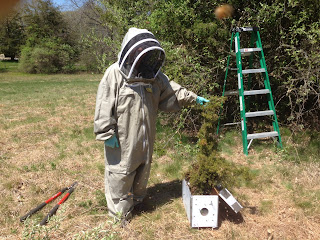 I’m in Washington today, attempting to constrain healthcare IT regulatory zeal.    Tomorrow is a day off to finish all the wedding details.    Pictures to follow next week
Posted by John Halamka at 3:00 AM

I hope you and your family had a lovely wedding celebration!

Hi John; I'm curious about the bee-keeping activity. Do you have any advice on how to find a local bee-keeper to pick up a new hive that's picked a bad location (bad location from my perspective, anyway)? How did someone find Kathy to pick up a hive?