When we first moved to Unity Farm, I became a timber expert - managing 15 acres of oak, maple, cedar, birch, poplar, and hickory.   I learned about the character of each of the trees, their wood, and their ecosystems.

By building the Unity Farm tree house, I became an expert in tree house support systems, ensuring structural stability while avoiding harm to the tree.

Last weekend, building a 300 foot zip line, I’ve learned how to create transportation systems between trees.   There were many lessons learned.

First, everything you’ve seen in movies about zip lines is false.  Batman just shoots a cable into a wall and then glides down the 45 degree slope.    Not possible.

First, I used a sight level to assess the change in elevation of the topography of the Unity farm upland forest.

I chose two trees, 300 feet apart, that were 2.5 feet in diameter with an appropriate elevation difference.

I then applied a protective 12 inch collar of 2x4s around the trees such that the zip line would be 7 feet high at the termination.   I created a 6% rise over 300 feet to the launching tree.   Can you find the straight cable going through the forest in the picture below? 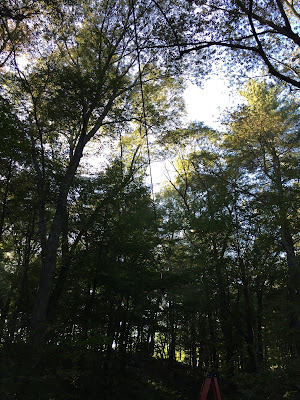 Using a cable grip and come along tool, I pulled 5/16’s aircraft cable between the two trees and attached it to the trees by using a separate piece of cable around the 2x4 collar and turnbuckles.     Here's a photo of the tree at the end of the run 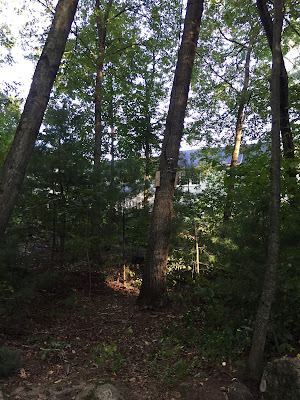 I ensured the cable was not piano wire tight, but had about a 2% sag. 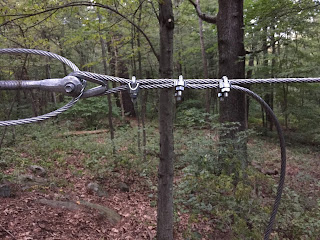 I created a 30 foot bungee brake set at 60 feet from the termination.

Donning a climbing helmet, harness, carabiners, and climbing sling, I attached myself to a trolley pulley on the line.    Just in case my planning failed and I needed medical attention, I put my cell phone on my harness and launched.

I survived the experience, going from tree to tree at about 30 mph.   The brake worked perfectly and I stopped about 15 feet from the end point.

There is a bit more work to do, creating a landing platform that makes it easy to unclip the harness from the trolley, but I’m impressed by the ease of creating and managing zip lines as long as you have the right equipment and tools.

Last weekend I did another refractometer check of the apples and the Macoun, Gala, McIntosh and Northern Spy are all at 15% sugar.    We’ll harvest them this weekend.

For our first cider batch of 2015 we chose a two parts Honey Crisp, one part Gala, and one part McIntosh.   The apples are in our walk in refrigerator, ready for crushing this weekend.

A local resident was recently asked to give up his rooster because neighbors complained about crowing at all times of day and night.    At Unity Farm, we have crowing, barking, honking, quacking, and buckwheating (Guineas) 24 hours a day, so extra crowing would not even be noticeable.

The rooster is a bantam cochin - small chicken with a very ornamental look.    His size may be small but his personality looms large over the barnyard.   In homage to Game of Thrones, we named him Tyrion.   Here’s a photo 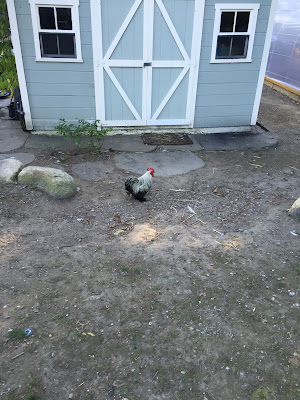 I travel to China on October 15 for a week, so the first part of the month will be finishing all the harvesting and cider making before I leave.    This will be my last year of traveling in October.   Planting can be done at many times during the year, but harvest is always in October.   As my wife says, living things must take precedence
Posted by John Halamka at 3:00 AM

I love the way you actively look to add joy into your life!

During your upcoming travel to China you might want to combine it with your interest in zip lines:

Always enjoy your Farm posts. Boys have been begging for a zip line, so this one is instructional too!