I’m back from China and have caught up on the accumulated farm work that built up in my absence.    I did what I needed to do in Asia, lecturing about Meaningful Use accompanied by lasers and fog, but not fireworks. 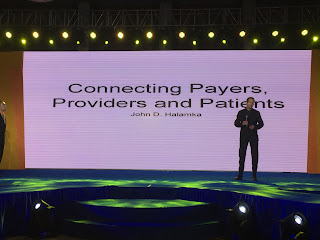 Kathy kept everyone healthy and happy (such as the chickens and bees below) but the more physical work - chainsawing fallen trees, hauling hay, digging trenches, fixing irrigation, and cider production work falls to me. 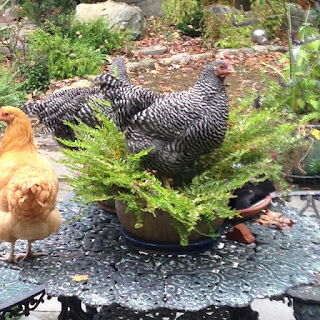 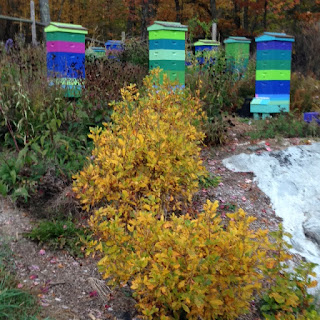 The ash borer beetle has caused the death of ash trees through the US including those on Unity Farm.   Although we do not have an active infection, the dying trees have been decaying and collapsing over the past few years.   I’ve proactively taken down all ash trees near structures, but multi-ton trees still fall in the forest, sometimes getting caught up on the branches of other trees.   Cutting down these mammoth stuck trees is very dangerous and that’s why they are called “widow makers”.   With Kathy standing at a safe distance in case I run into trouble, I cut them down using a plunge cut technique

The farm driveway replacement project continues to progress but during the excavation several irrigation pipes were cut.  It was not clear which were old pipes and which were new pipes.    The person helping us with the project repaired them using a standard coupler technique.   Unfortunately he connected the wrong two pipes together so the resulting configuration did not work.   I excavated the existing pipes and followed them from their origin to their destination, cutting out old pipe and reconnecting the system. 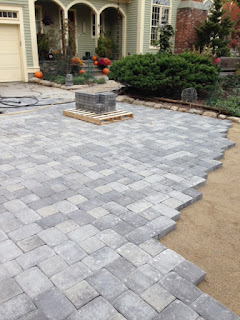 During my absence, the cider fermented from a specific gravity of 1.050 to 1.000  creating 6.1% alcohol by volume.   Upon returning from China, I racked all the cider into fresh sterilized fermenters for the secondary malolactic fermentation over the winter.   The 2015 cider is delicious and I’ll bottle it in the Spring.

One of the major problems of traveling the Fall is missing the major part of the mushroom harvest.   Kathy did a great job harvesting the Shiitake crop and selling it to farm stands/markets throughout the Boston metro west area.    The only thing for me to do is move our 100 new logs to the inoculation area where we’ll drill and add spawn to them over the next month or so. 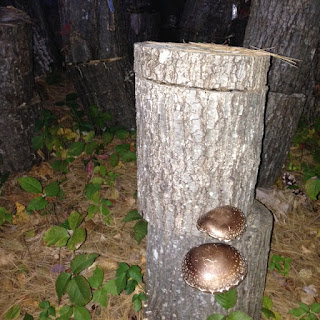 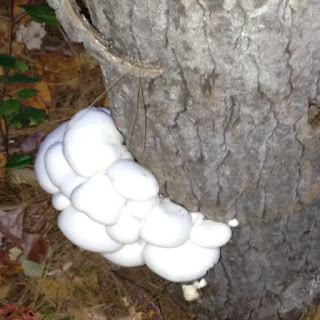 Finally, it was time to clear out the green houses and plant the last of the fall crops, including garlic.   Our 16 raised beds are now filled with winter density lettuce, spinach, chard, and romaine.   The hoop house and floating row covers will keep them warm during the 100 days of winter ahead.

This weekend we'll begin the winter prep of all our machinery - changing oil, adding gas treatments, and washing off the accumulated dirt of summer in preparation for the snow that is soon to fall

My husband decided he was going to cut down our ash tree in the back yard. He got all his equipment ready and when I saw it I told him to come in the house because the co-pay if he broke his leg was more than the price the Tree Cutter wanted.

Glad to hear how well this year's cider tastes, I would love to sample it some time. Our bees have had a good fall and appear to be going into the winter in large numbers, so we're optimistic (or at least hopeful) about their survival this winter. The Italians have been especially feisty about protecting their home whenever we get too close. Do I look like a yellowjacket?