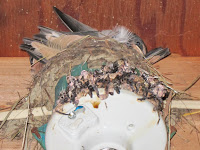 One of the side effects of creating the orchard at Unity farm was opening about 2 acres of airspace adjacent to our pasture.  This has attracted  many new species of birds which now dance and dive in the clearing between our woodland and marsh.   Since adding the orchard we've seen a significant increase in our barn swallow population.  Throughout the day, at least 5 adults dash at high speed around their own open air playground, eating mosquitos and enjoying their social community of birds.

Our barn has two sliding doors which open to the male and female paddocks.  The swallows retreat to the barn for shelter at night and during the rain.   Recently a mating pair built a nest on top of a porcelain light socket.   We use LED lightbulbs in the barn, so the socket does not get hot.   The nest is a delicate combination of mud, sticks, great pyrenees fur, and feathers from our chickens/guinea fowl, pictured above.

This week, 4 swallow babies are fledging.  Two are pictured below balanced on a barn door rail.   Watching the parents feed them for the past several weeks, I've read a great deal about swallows and can now answer some lifelong questions I've had since 1975, when King Arthur first had a dialog about swallows with the guardian of the bridge. 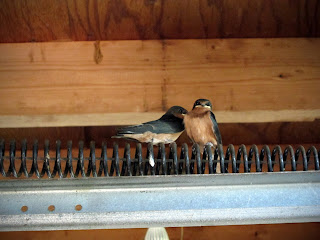 1.  Are the swallows of Unity Farm considered European or African?

2.  Much of the day the adult swallows gather insects to feed to their young.  I've watched them busily carrying food and nesting materials as the cruise through the paddocks and into the barn.     When they're done feeding their babies and reinforcing the nest, they fly above the paddock turning and twisting at high speed before deftly returning to the barn.   Watching them makes me wonder - just how fast do they fly when unencumbered i.e. What is the airspeed velocity of an unladen swallow (European)?

Luckily much research has been done on this topic.


A 54-year survey of 26,285 European Swallows captured and released by the Avian Demography Unit of the University of Capetown finds that the average adult European swallow has a wing length of 12.2 cm and a body mass of 20.3 grams.

Because wing beat frequency and wing amplitude both scale with body mass and flight kinematic data is available,  we can  estimate airspeed (U).

Graham K. Taylor et al. show that as a rule of thumb, the speed of a flying animal is roughly 3 times frequency times amplitude (U ≈ 3fA).

Based on wing beats per minute, body mass, and amplitude, the answer for our swallows appears to be 24 miles per hour (11 meters per second).   So if on your quest to visit Unity farm, you are asked the airspeed velocity of an unladen swallow (European), you know the answer!

I first found your blog when researching MU2. I added it to my reader because of your wit and way with words. Along the way, I've enjoyed reading about Unity farm. Today's post brought a smile to my face. Thanks! :)

Made me laugh out loud.

Thank you for answering the questions. Such fun.

European barn swallows are the same species as our N. American Barn swallows, but unlike ours which usually have reddish underside color, the European race have mostly white underside feather coloration. Like humans, many bird species have various races. FYI.

I first found your blog when researching MU2. I added it to my reader because of your wit and way with words. Along the way, I've enjoyed reading about Unity farm. Today's post brought a smile to my face. Thanks! :)
Health Magazine