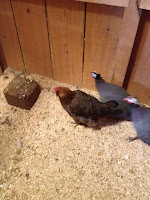 The world of Unity Farm is cold and frozen this week.   There's ice and snow on the ground and night time temps are approaching single digits.   It's not the right time to hatch chicks.

However, randomly throughout the year, egg laying hens decide that hatching eggs is their only priority.   They sit on the eggs 23+ hours a day, taking only a quick break once a day to eat and drink.   The go broody.

We're fine with the concept, but this week, our most maternal hen, an Ameraucana named Terra, decided to create a nest under the coop, 10 feet from any edge.   She was completely unreachable by us, but very vulnerable to local foxes, fisher cats, and raccoons.

Here's how it happened.   Every night we put our chickens to bed by bolting all internal doors/passageways from inside the coop to prevent predators from sneaking in.  Then we close the coop front door and put a carabiner on the latch to ensure it stays shut.   Before lockdown, I fill the water fountains and grain feeders, then count every bird (13 chickens, 18 guinea fowl).   All of our chickens have names, so we know exactly who is roosting in each section of the coop.   Generally, the large rooster, Lucky sits on low perch I built for him.   The small rooster, Rainbow, sits as far from Lucky as possible.   The hens except for Terra and Zephyr, roost above Lucky.   Terra and Zephyr sleep with the guinea fowl.

Last weekend, when I counted the chickens, I could not find Terra.   We saw her at noon on Sunday, but by twilight when we close up the coop, she was gone.    I spent an hour running all the trails looking for signs that a predator had eaten her.   I put the dogs on lead and we ran through the property looking for fox/coyote tracks or other predator activity.    We found nothing.   Odd.

The next morning, my wife spread scratch grains (think of it as candy for chickens) around the coop.   A few minutes later Terra appeared.   Then she disappeared again.   When I returned from work, I crawled under the coop with a flashlight and saw her nesting far beyond my reach.

I used a 10 foot bamboo pole to gently move her toward the side of the coop.   No luck.   She was committed to hatch the eggs she laid in that subterranean space.

My wife tried scratch again each day.   No luck.    I checked on her nightly to ensure she was still healthy.

Last night, a fisher cat ran by the paddocks and made a horrible screeching sound.   I had to protect Terra in her vulnerable position, so in Cask of Amontillado fashion, I walled her into her hiding place.

This morning I removed the barrier.    My wife and I used 2 bamboo poles to create a moving barrier.   We scooted her away from the nest and eventually she gave up, exiting in to the barnyard.    We gently picked her up and placed her in the coop, where she ate and drank her fill before roosting in her usual place.

Given the historic snowstorm that is impacting New England this weekend, we rescued her just in time.

Let's hope when other hens go broody in the winter, they have the sense to do it indoors!