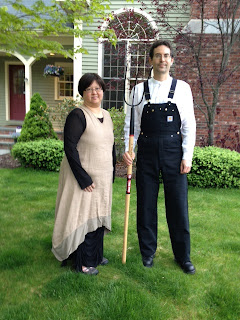 Kathy's MRI showed no evidence of tumor and her surgeon worked with her to develop a go forward plan - lumpectomy on May 11 instead of mastectomy.

This has been a busy week moving Kathy, 2 cats, 2 rabbits, and 6 chickens to our farm in Sherborn, Massachusetts.   I've spent my nights unpacking boxes instead of posting blogs.  I'll return to a normal writing schedule next week.

COMPARISON: No prior breast MRIs are available. Correlation is made with mammograms dated April 25, 2012 and December 13, 2011.

TECHNIQUE: Multiplanar T1- and T2-weighted images were acquired on a 1.5 Tesla magnet including dynamic 3D imaging obtained prior to, during, and after the uneventful IV administration of 0.1 mmol/kg of gadolinium-DTPA.

BILATERAL BREAST MRI WITH AND WITHOUT CONTRAST: There is minimal background
parenchymal enhancement. There is no suspicious focal enhancement or mass in either breast. The left breast skin appears thicker compared to right.  Post-surgical changes are present in the left axilla consistent with history of sentinel node biopsy. There is no evidence of pathologically enlarged axillary lymphadenopathy.

In summary, there is no longer any evidence of tumor.   Based on this positive finding, her breast surgeon scheduled an urgent appointment with Kathy to formulate next steps.  Together, Kathy and Dr. Houlihan agreed on the following:

"I just saw Kathy Halamka who has had a complete remission by MRI after Cytoxan/Adriamycin times 4 dose dense and 5 rounds of Taxol, which was discontinued due to Taxol toxicity. I plan to do a wire location with two wires of the two clips on 5/11.  I plan an en bloc resection. If margins are ok, plan Radiation Therapy. If residual disease, probable mastectomy.  Single micro met in sentinel node--plan no axillary dissection based upon current guidelines."

So far so good   The numbness in Kathy's hands and feet is better than it was - pins and needles rather than complete lack of sensation.

This week our lives are returning to normal post chemotherapy and post move.   Six more chickens arrive tomorrow.    Our next milestone will be lumpectomy with local anesthesia on May 11.   We're all hoping for negative margins (no sign of active disease).
Posted by John Halamka at 3:00 AM

I am so happy for you both.
Hope the good news continues!

Best. And may I say the two of you have Nan and Dr McKeeby beat as models.

Dr. Halamka and Kathy-- what a great photo! You are both an amazingly strong couple. Moving to a new home is alot of work, but is always an indicator of a new phase in our lives... This was totally meant to be for both of you. I am looking forward to more on the chickens and what their names are. Warmest regards-- Sharon Wentz RN
Corvallis OR

Such encouraging news about the remission!

Love the photo, farmers John and Kathy. Grant Wood would be proud.

What a wonderful & playful photo! I wish you both many great adventures in your new home. The latest medical report is incredibly good news. Wishing you strength & bliss.

Best of wishes for this new stage of your life.

I remembered, you wanted to live closed to rail lines. Have you managed to get it?

Once you peel the label off your new pitchfork, you're just a 'farmer blow' away from being authentic.

Tennessee Williams wrote “Time is the longest distance between two places.” Perhaps that is what you sometimes feel: It may seem that it will take forever to reach a new horizon and be in a position to look back at your current place as a completed chapter in your life. But your hair is growing back, your sensation is returning, and your fuzzy chicks are preparing for a new home with their adoptive Mom. Although these steps take time, they lead to that new place and are causes for celebration during your journey. I feel confident that with your continued care and patience you will arrive there with a renewed smile on your face.

Thinking of you John and Kathy,

P.S. Great picture. It made me chuckle.

Hi John and Kathy—picture perfect—nice to see you both together in good spirits..best wishes for the future adventures together.

great news for Kathy and you! May the healing continue. Best wishes for the new farm....had to do a double take on the photo...when was the last time you wore something other than solid black?

Great news! all the best with the move and the surgery. Hope all goes well.