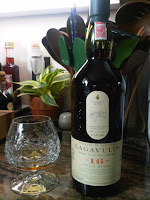 During my trip to Scotland I had the opportunity to learn more about single malts from my Scottish hosts.  If you really want to choose a great whisky, ask a Scotsman!

Andrew Morris, a Professor at the University of Dundee, and the person who invited me to Scotland, is a member of the Royal and Ancient Golf Club in St. Andrews.  For golfers, this is a sacred place, the home of golf.   Andrew is a member,  a remarkable honor since only 300 people in all of Scotland are members.   As we entered the club, I walked by the British Open trophy which sits next to the lockers of club members.   I looked at the name plate closest to me - "A. Palmer".

We retired to the "Great Room" under a painting of the Queen and asked about the single malts served by the club.   They serve two which are produced exclusively for the Royal and Ancient - an Islay (pronounced eye-lay) bottling from Western Scotland and a Speyside bottling from Eastern Scotland.    Western single malts are often more Peaty/Smokey/Earthy in character while Eastern single malts are more subtle with flavors of sherry and vanilla imparted from the casks they are aged in.   I ordered the Speyside and added just a drop of water to release the aroma.   Over 30 minutes I cradled the glass, sipping slowly to savor the amazing nose and palate.

As we left the Royal and Ancient at 10pm, people were still golfing on the 18th hole of the Old Course.

Here are the favorites suggested by the folks in Scotland I asked:

Lagavulin (Islay) - a smokey, peaty, complex  whisky  that is considered by many to be the finest single malt made in Scotland.   On most restaurant menus it commands a higher price because of its reputation and quality.

Highland Park (Orkney Islands) - a peaty whisky with a sweet/sour finish and subtle vanilla flavors.  The northernmost distillery in Scotland.

Talisker (Skye) - a peaty whisky, from the only distillery on Skye.  Robert Louis Stevenson regarded Talisker as 'the king of drinks' and who would argue with him?

There are many myths about Scotland - that kilt wearing, bag pipe playing,  freedom loving men (per Braveheart), are thrifty with their money and enjoy a wee dram in the pub on a daily basis.    I saw no kilts, heard no bag pipes, and although we did rehydrate at pubs after our hikes with fine Scottish ales, the only whisky I consumed was at the Royal and Ancient.   The Scottish are warm, gregarious, and selfless hosts.

Thank you Andrew for a remarkable experience and an amazing education about Scotland and its people.   I'll raise a toast with a freshly opened bottle of Lagavulin.
Posted by John Halamka at 3:00 AM

Hugh Trevor-Roper's essay in the book "The Invention of Tradition" is a fun take on Scottish myths. There's also a posthumous book that covers the same ground. For serious histories anything by Tom Devine, professor of Scottish history at the University of Edinburgh, is worth reading. It's amusing and tragic that the first things people, including Scots, often associate with the country are whiskey, golf, haggis, and Bonnie Prince Charlie given that this is the soggy, impoverished land that gave us many of the most important Enlightenment thinkers, not least Hume and Smith, although Smith's thought has itself been mythologized and mangled by modern economists into something that would have probably horrified him.

For more Islay whiskies try the Ardbegs. I'd probably start with the Uigeadail and then maybe the Supernova or Corryvrekan.

Ardbeg, I'd vote for that as well. Plus Bowmore 16yo cask matured and Laphroig 12 yo cask strength. Just to be safe ;-)

Really pleased you enjoyed your visit to Scotland, and disappointed not to have been able to attend your talk - which I hear was great. However whiskey is for the Irish. Scots drink whisky.

In Boston it is often difficult to find some of the better malts. Federal Wine and Spirits across from the Old State House is a good bet.

You might also try an Old Pultney, from Wick, which will be milder that the Lagavullin, which is one of my favourites.

I'm an MBA student, currently dissecting the caregroup case study. I'd much rather be dissecting the single malt issue. I think it's refreshing how transparent you and the organization have been...most of our cases are so old they have little relevance. I've bookmarked the blog.