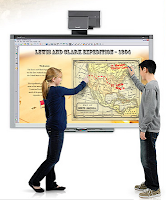 Harvard Medical School is piloting digital whiteboards from Smart Technologies.
It's not a giant iPad, it's more like a giant Wacom tablet paired with a computer and video projector.   The design works surprising well.
Here's the idea:
Mount a wall sized tablet with a reflective surface in the classroom.
Mount a special digital projector above the whiteboard
Connect the digital projector to a computer with HDMI audio/video
Provide digital pens - red/green/blue/black in special holders so that when a pen is removed from a holder, the whiteboard software knows that the red holder holds a red pen and all motions on the table should be in red.
Provide software that includes a pen/erase/capture selections
The end result is that web pages, applications and powerpoint are projected and teachers can annotate them with pens or their fingers.   They can capture and save their work for later display.
Early response of our evaluators has been very positive.   By combining a wall size tablet, screen, and projector with full audio/video interface into one package, we empower faculty to use all these educational technologies.
One great aspect of this is that the screen is separate from the projector, so it can be replaced if it is worn or damaged.   Creating a wall sized iPad would require replacing the display and the digitizer simultaneously.
Digital whiteboards for teaching.   That's cool!
Posted by John Halamka at 3:00 AM

Why do you need the projector? Can't the computer connect to the whiteboard directly? Our schools have a similar setup: whiteboard, projector and MacBook.

Could you connect an AppleTV and wirelessly stream from iPad to the Smartboard with Airplay?

My kids have a similar technology in each classroom called a SmartBoard. How is this different?

Uh, we've been using them for years at the university of nebraska medical center. The students often do group projects right on the boards. Slick technology and a lot cheaper than large scale touch screens. Not minority report but getting their.

The boards we've installed are much brighter, support higher resolution, have short throw projection, and will be multi-touch very soon. It's true that Smartboards have been used in elementary schools for years, but the low resolution and dim projection that was adequate for elementary or high school could not be used for medical education. The technology is now mature enough for us to use in higher education.