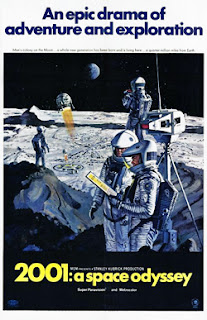 I remember that Summer night in 1977 when I went to the Pacific Cinerama Dome to see a new film called "Star Wars".   The person sitting next to me was Connie Francis.

I've been a lifelong Sci-Fi and Fantasy junkie, spending hours in my teenage years with novels by Arthur C. Clarke,  Robert A. Heinlein, Isaac Asimov, Ray Bradbury and Larry Niven.

Here are my favorite Sci-Fi films.   I watch them again every few years and never grow tired of these timeless classics.

Close Encounters of the Third Kind

Back to the Future

Planet of the Apes

The Day the Earth Stood Still

The Princess Bride
Posted by John Halamka at 3:00 AM

Excellent list! I especially appreciate that you have old classics like METROPOLIS and DAY THE EARTH STOOD STILL here. They indeed are timeless. FYI, here are sf movie reviews I have published on my own blog: http://www.ddmcd.com/movies/category/science-fiction

"True Love!" Couldn't resist posting a Princess Bride quote. By the way, did you ever watch Stardust (the 2007 film with Pfeiffer and De Niro)? It's the movie I think is closest to the spirit of PB.

2001 ASO is THE quintessential sci-fi epic but I should give a nod to Forbidden Planet as well. The idea of finding the ancient technological ruins of an unfathomably advanced civilization is like a visit to the ultimate theme park.

Now I want to know if you have a graphic novel list :)

You're missing one of the best and most accurate predictors of future reality, Woody Allen's Sleeper. I think I heard the featured house was just sold out of foreclosure. No mention of the Orgasmitron.

I saw the re-release of the directors cut of Close Encounters on the big screen here in NYC a few years back. - my all time fave sci fi movie!

Forbidden Planet, recently released on DVD, was decades ahead of its time, both in the psychological sophisitication of its plot as well as the special effects. It's influence is evident in many sci fi movies that have followed.

Great list :) But what about Dune by David Lynch? :) I would also include "The last starfighter" :). Thanks for sharing.

Very much enjoyed your list! I felt compelled to mention my favorite - Until the End of The World (Wim Wenders)