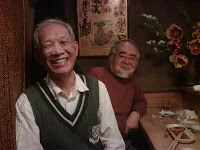 In July of 2007, while eating Ramen on a hot July night in Ramen Alley, Sapporo, Hokkaido, Japan,  I enjoyed a fresh local Sapporo beer.

On a mid-winter night in Kyoto in 2009, I enjoyed homemade Tofu at Kiko, my favorite restaurant in Kyoto, just south of Shijo-dori between the Kamagawa River and Kawaramachi-dori behind the Hankyu Department Store, 30 meters south of the Murakami-Ju Japanese pickle store.    Mr. Chino (pictured above), who I met for the first time that night, bought me an Asahi "Super Dry".

While sitting with friends from Tokyo Medical University in March of 2010, we shared a Kirin Ichiban.

While enjoying Okonomiyaki in the Gion (Geisha district) of Kyoto, we toasted Suntory during Obon in August of 2009.

Japan is home to many great sakes and beers.   The big four beers are Sapporo, Asahi, Kirin, and Suntory.

In the US, most of our Japanese beers come from Canada or US breweries that  make beer under license from the Japanese companies, but they pale in comparison to the fresh brews available in Japan.

My favorite Japanese Beer is Sapporo - it has a great hoppy character, a full body, and amazing texture.

My advice when enjoying beer with your Japanese friends.  Due to a polymorphism in alcohol dehydrogenase  many Japanese show the effects of alcohol early but tend to clear rapidly.   Caucasians tend to show few effects of alcohol early but clear very slowly, meaning that your Japanese friends have much more drinking endurance than you do!  Thus, like many things in life, moderation is your best bet to success while enjoying Japanese beer with friends.  Kampai!
Posted by John Halamka at 3:00 AM

Tip for drinking with Japanese: if you want to stop (or take a break) leave your glass full. As soon as you empty it, they are going to refill it (they're just too nice!).

Learned this one the hard way.

My favorite beer: Sapporo reserve... amazing.
About other things... did not like that much Kyoto (sorry, I know is named by UNESCO etc...) 'n' loved Koya-san (a rare opp that 80% of tourist will never see in Japan)

I forwarded this to a friend who was the 'victim' of many entertainment evenings with Japanese businessmen and here's his reply:

"Most, if not all, of my Japanese friends did not fit this profile. If they were alcohol sensitive they tended to stay that way throughout the evening. If they weren't, they tended to continue to try to drink you under the table throughout... the evening. Thank goodness for a large BMI number !!!!! Otherwise, I might have actually ended up under the table. Also, they tended to use a team approach to an evening out. 4 or 5 of them individually hoisting one with you so you had 4 or 5 for each of their one beer or drink (usually Sake). To slow things down a bit, you had to insist that everyone Compaii at the same time and each time. Always though, a good time was had by all !!!"