How I Spent my Summer Vacation 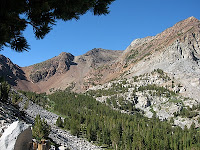 I've returned to Boston, to fast wireless networks, humidity, and traffic.
It's a marked contrast to my time on the John Muir trail. Not better or worse, just different.
On the trail, time slowed to the point that my measurement rubrics became dawn and sunset, the amount of water left in my hydration pack, and the time until my next snack.
I walked about 150 miles through the Sierra, up and down numerous peaks and passes. I gathered wild mushrooms (Leccinum, Lentinus, Agaricus). I ate numerous wild plants (waxy currants, gooseberry, swamp onion, mint). Temperatures varied from the 20's at night to the 60's during the day.
When I rested, I was joined by golden marmots, pikas, chickarees, Belding's ground squirrels, mule deer, and even a beaver, dragging an aspen branch across the trail at dawn.
During the day, my constant companions were Clark's nutcrackers, grouse, hairy woodpeckers, stellar jays, and the occasional great horned owl.
I stored my food in a 6 ounce Ursack, a kevlar bag approved for backcountry use everywhere along the Pacific Crest Trail except in Yosemite and Sequoia-King's Canyon. Since I never slept within the borders of those national parks, I was fine. No bears ever bothered the vegan food I was carrying.
My pack with food and water never weighed more than 10 pounds, enabling me to cover 20-25 miles per day with several thousand feet of daily elevation gain.
I only met two other north bound hikers along the trail but we walked at different paces, so I spent the time in solitude.
The physical challenge was not a problem - once I acclimated to 10,000 feet I had no problem with the hiking. The emotional challenge of being alone in the wilderness, with no one to speak with, no internet connection, and no pressure other than to keep warm and hydrated was admittedly a struggle.
Numerous studies have been done or are in progress to examine the effect of constant connectivity on our brains. We all develop a kind of ADHD, losing the ability to maintain focus, explore issues deeply, and savor the experience of the world around us.
The Last Child in the Woods explores the way our children have lost touch with the rhythm of the natural world.
It took a few days, but I regained the ability to sit on a rock, listen to the wind, and soak in the details of every flower, tree, and waterfall.
It's tempting to believe that I could maintain that reverie for months, living in that archetypal cabin in the woods that many of us dream about.
However, by the end of my trip, I realized that my highest and best purpose at this time in history is to share my technology, management, and problem solving skills with government, academic, and industry leaders to accelerate positive change. If I work hard enough, I can ensure my daughter and her future family never experience a medical error, a problem with care coordination, or a bankrupt healthcare system.
So, I'm back, recharged and rejuvenated, with a new sense of perspective. The world will continue to have its pessimists, its critics, and naysayers, some of whom will direct their ire at me. However, if I just think back to sitting on a rock in the Sierra, not knowing what time it was or having a to do list, I can keep it all in perspective. This time of Stimulus funding, healthcare reform, and meaningful use is creating high pressure, unreasonable deadlines, and unrealistic expectations for everyone. As long as we treat each other right and remind ourselves of the true cadence of the natural world around us, we'll be fine.
Posted by John Halamka at 6:47 AM

Glad that you had a reflective period during the vacation. Your trip reminds me of what ascetics do in the Himalayas. Maybe, your next trip is to Himalayas:-)

Having moved into a CIO role of a rural hospital in East Georgia recently, I see the elements of pressure that you have alluded play out. In our situation, budget is a constraint with technology requirements for capital investment abundant. In addition, the need of finding the right vendor at right price and preparing for ICD 9 to 10 change in an economical challenging environment is not easy. BUT, the zeal that I see among the care givers and administration that they want to do the right thing for the patients, allows me to put things into perspective.

I truly believe that once we ride beyond this economical tumulus period(yes when it happens), organizations that survive and last will be in a better position to offer care for our patients. For now, the field is very very trying.

As a background, my name is Anna and I attended your HIT Leadership session in Harvard Public Health in January.

Welcome back and thanks for your trip report - I have been looking forward to it. My husband and I will 'unplug' and spend two weeks backpacking and climbing in the North Cascades next week. I can hardly wait.

Thanks. Nice piece of writing. I'd love to get there some day too. Be well.

Thanks, John, for that thoughtful and very rewarding piece of writing. I've been living in Nairobi - off and on - for the last 10 months and even though my work keeps me connected with lots of people I find the best parts of my life here are the quiet times I can be by myself and think about the beauty that surrounds me. In my "real" life I live and work in New York - in Manhattan - and this is so different. So I very much appreciate your good comments about the value of quiet and reflection. Thank you.

Interesting post. A couple of years ago, my significant other and I hiked the Wonderland trail around Mt. Rainier. After returning to work, I had a very hard time adjusting. There is something very satisfying in have a singular objective for the day (hiking from point A to point B). To come back to coworkers quibbling over who was taking a longer break and mass media was almost unbearable. We long for our breaks like this from our daily routines. We need it!

John - good to be able to read your blogs again. Sounds like a great trip. I thought this was also supposed to be a family vacation?

It was a family trip. We did great family things together for several days. My family dropped me off at the trailhead and then picked me up a few days later.

Thanks for the rejuvenated post, seems you enjoyed a lot your summers and time with family. I can resonate with you doing the same back in India. Good to see you back.

Hi,
You mentioned something about vegan eating on the trail and bears. I have hiked many places (including Southern California where I currently live), in part as a way to get away from a high pressure career that I feel passionate enough about not to consider giving up. I'm vegetarian, not vegan, and we have always had to worry about bears - here or in West Texas, Colorado, other places. Were you just lucky do you think, about not having bear problems, or is there something about vegan food (vs. vegetarian) that is less enticing for bears? (if so, I'll make my next hike a vegan hike and try it out - any specific suggestions?). thanks - nice to see you back.

Can you share how you kept your pack weight to 10 lbs?