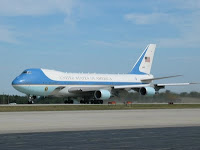 I'm sitting at Logan Airport awaiting a plane to Washington to testify at a meeting of the President's Council of Advisors on Science and Technology at the National Academic of Sciences.
A few minutes ago, I noticed that the tarmac was empty of planes and numerous black SUVs appeared. Then I noticed a few military folks running around the roof of Terminal C. I looked to the north and saw a large 747 approaching - Air Force One.
Realizing that today is Friday and its time for my Cool Technology blog, I'd like to declare Air Force One the cool technology of the week. I've always wondered what electronics are on board. Here's an overview from HowStuffWorks
"The most remarkable feature on the plane is it's extensive electronics. It has 85 onboard telephones, a collection of two-way radios, fax machines and computer connections. It also has 19 televisions and assorted office equipment. The phone system is set up for normal air to ground connections and secure lines. The president and his staff can reach just about anybody in the world while cruising tens of thousands of feet in the air.
The onboard electronics include about 238 miles of wiring (twice the amount you'd find in a normal 747). Heavy shielding is tough enough to protect the wiring and crucial electronics from the electromagnetic pulse associated with a nuclear blast.
Some of the most interesting parts of the plane -- it's advanced avionics and defenses -- are classified. But the Air Force asserts the two planes are definitely military aircraft, designed to withstand an air attack. Among other things, the plane is outfitted with electronic counter measures (ECM) to jam enemy radar. The plane can also eject flares to throw heat-seeking missiles off course."
And where did all those black SUVs and support equipment come from? In advance of every Air Force One flight, the Air Force crew sends C141 Starlifter cargo carrier planes, carrying the president's motorcade to the destination. This collection of bulletproof limousines and vans, loaded with weaponry, keeps the president safe on the ground.
Air Force One is effectively a secure, mobile data center - that's cool!
Posted by John Halamka at 11:30 AM