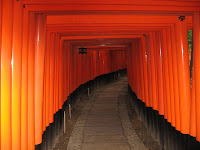 For the next two weeks my wife and I will be on the road in Japan, meeting our 16 year old daughter in Japan, where she's spent the summer in intensive Japanese language study. My blog entries will be episodic but I'll remain connected via my 3G Blackberry. I'll be giving a lecture at Kyoto University but most of the trip will be seeing a side of traditional Japan that most tourists will not see.

We'll celebrate our 25th wedding anniversary in temples with a history of bringing good luck to relationships.

We'll make traditional Japanese rice confections in a small shop in the Gion.

We'll eat blue-green Tofu, okara in yuba handmade in a 10 seat restaurant on the banks of the Kamagawa.

We'll join a sake maker on the roof of his factory for a view of the bonfires of Obon lit on the mountains around Kyoto.

We'll shop for mountain yam and daikon pickles in the mile long farmers market hidden in the arcades of Teramachi.

We'll drink Green Tea at Uji in the oldest teashop on the planet.

We'll travel to Miyajima and kayak the Inland Sea and visit shrines only accessible by boat built by fisherman and pirates.

I'll play the Shakuhachi from the top of Mt. Misen near the fire that Kobo Daishi lit in the 1600's and is still burning.

Normally, I would go climbing in the Eastern Sierra for my yearly August time away, but the opportunity to travel with my wife and daughter in Japan is a very special opportunity. My daughter heads off to college in 2 more years, so we'll treasure the time with her as our Japanese interpreter and sometimes tour guide, given her experience spending the entire summer there.

I'm hoping the new few weeks are quiet in Washington, as HHS moves to regulation writing mode. You can be sure I'll keep you informed via my blog and Twitter.

John,
Enjoy your family time, eat well and may you be blessed on your journeys.
Thanks for all you do for the healthcare community.

Bob Voyage. Enjoy the family time and teh wonders of the Japanese Culture.

I am in Tokyo this week. And can highly recommend the experience

John,
We are looking forward to see you and to hear your lecture in Kyoto University Hospital.

Sounds more dangerous than visiting Watts California. I just made .05 on the yen / usd . Maybe I will see Deborah in Lawndale. I will maybe try the 40 miles of unpaved soda lake road . Then down hwy 33 to Ojai. All this in a 3 speed Dodge Dart. The head bolts are now tightened. This car used to get 25 mpg highway. No big bucks here. Remember that Patton bugle call? I used to hear it at West high in Torrance. Extremely rare nowadays. duh duh duh Be sure and check after shop hours in Japan. I read that somewhere. Make a report. I have been terrified of Watts and this trip for several weeks now. Mercury sized rocket? What me ? Streets of Bakersfield? I still live with my parents at Multimillion dollar 50 Degree SANTA CRUZ -- AKA "South Alcatraz" No citric acid cannot produce Hydrogen gas. Never mentioned in chemistry.

Wow! what a wonderful itinerary you've planned. Sounds like an incredible opportunity to explore the spiritual and historical side of Japan that is so important, but obscured by its current industrial might.

Looking forward to your next blog, especially tomorrow after the HIT Standards Committee. Having to work harder to piece MU together in your absence. Especially interested in how great a role self attestation will factor into MU validation.