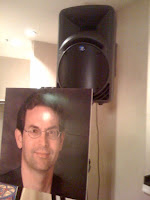 In several blog posts, I've discussed my desire to travel less but still stay connected to all my colleagues, the industry, and government via technologies that support virtual meetings. Last week was a great example of all these technologies in action. I did not set foot in Logan Airport on a single day, yet I traveled all over the world. Here's how I did it:

Monday - Madison, Wisconsin via Webex. Patty Brennan led an interactive planning teleconference and presentation with 20 people to prepare for evaluation of nearly 150 proposals as part of Project HealthDesign. We had a great dialog about Patty's presentation using only a phone and browser (Firefox on Mac OS X in my case).

Wednesday Washington DC via Adobe Connect for the HIT Standards Committee Clinical Quality Workgroup. Wednesday was a tricky day for me. I had to be in Boston for a meeting of the Board of the Personal Genomes Project, then in Washington for the Workgroup call, then in Washington for a meet and greet with HITSP volunteers. There was no way I could complete all that needed to be done with physical travel. Adobe Connect was great for the Workgroup meeting, but what about the meet and greet? The event was in a hotel with slow and expensive internet connectivity, making high definition video conferencing out of the question. We implemented "poor man's telepresence" - a life-sized photograph of me (the photo above), a speaker system (looks like a Darth Vader helmet), and a telephone. I spoke to the 200 guests, then had "virtual cocktail hour" with several individuals for 1:1 conversations.

Thursday - Washington DC via Adobe Connect for the HIT Standards Committee Privacy Workgroup in the morning, then the world via a live webcast in the afternoon, then San Jose via Telepresence in the evening. Better Management.Com/SAS asked me to speak about HITECH and the upcoming efforts to computerize 70% of all hospitals and 90% of all clinician offices by 2014. You'll find a stream of the live broadcast online. Webcasting is a very effective way to reach a large audience. In this case, the newscaster was in a studio in North Carolina and I was in a studio in Boston. I ended the day with a Telepresence conversation from my basement to San Jose with Pamela Hymel, Senior Corporate Director of Integrated Health and Global Medical Director for Cisco Systems, regarding the use of virtual health visits to improve employee health.

Friday - Not a virtual meeting, but related. I met with Paul Sagan (cousin of Carl Sagan), CEO of Akamai Technologies, in Cambridge to discuss a number of BIDMC related projects. He explained that 20% of the entire web passes through Akamai's infrastructure as of 2009, given the need for bursts of bandwidth with a guaranteed quality of service, especially streams, webcasts and audio content delivery (Akamai hosts all of iTunes for example).

As airline seats shrink and the time/expense of air travel becomes more problematic, it's clear to me that Webex, Adobe Connect, Telepresence, Webinars, Webcasts, and even good old fashion phone teleconferencing must become the 'new normal' for the way we work.
Posted by John Halamka at 3:00 AM

I think you are right. And the potential benefits to society are enormous. Better accomodations of the needs of working parents, especially those with young children. Less need to travel means less of a carbon footprint left in doing so. And heck, when we have a pandemic flu that has some real virulence to it, maybe our business need not grind to a halt if we can continue to do much of our work even if we are quarantined at home.

Hey John, I've had some great success with the LifeSize codecs - of course you need one on each end, but the high fidelity cameras (HD!) make things work much better than anything I can do on my mac. Particularly if you're used to using whiteboards (I'm addicted) - I can include drawings in my discussions and my staff can actually see what I'm talking about.

Great and informative posts as always. It's been moving the direction for quite some time and finally becoming a reality as we all get busier.

What is always nice about your comments is that you are simply not repeating information, you roll up you sleeves and actively participate which gives far more value to the information you offer by all means. There's nothing that can take the place of experience and sharing the value with others.

And I, via Telepresence for a Cisco keynote, cited you under the heading "We can't run 21st-century organizations with 20th-century leaders," using the picture of you atop Eaglet checking in with the troops to illustrate the point. Details.