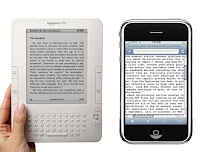 I've written about the consolidation of the devices I own and my use of the iPod Touch as an e-book reader, replacing my Kindle. On the day after I wrote that posting, Amazon announced Kindle software for iPhone/iPodTouch.

I downloaded the free application from the Apple App Store and gave it a try. Kindle for iPhone is compatible with any iPhone or iPod Touch running the iPhone 2.1 software update.

My first test was downloading books, since the Kindle for iPhone has no sample books included.

With the Kindle for iPhone, I clicked on the Get Books button and assumed I would be taken to an iPhone friendly version of Amazon.com. Unfortunately I was taken to a static page which told me to order books from Amazon on the web then synch them automatically to my device.

At first, I thought this to be a hassle and poor user interface design. Actually, it's not bad.

I can go to Amazon.com via Safari (or Firefox on my MacBook Air) and order any books I want using the one click ordering system, instantly making that title accessible to my mobile device via the WhisperSync application built into the Kindle for iPhone reader. Thus, I can take advantage of all the Amazon features I'm used to with the benefits of reading my purchases via my iPod touch. As a test, my wife and I searched for Amazon's free ebooks. We found a series of dimestore romances and a book called "Speed Dating" by Nancy Warren. It sounded better than "Slow Hands", "Kiss me Deadly", or "Once a Cowboy", so we ordered it.

I launched the Kindle for iPhone app and the Speed Dating text appeared. It took a few seconds for me to figure out the user interface - gesture forward to turn a page, touch the bottom of the screen to adjust font size/insert bookmarks/scan the table of contents, and press the Home button to return to my book list.

Although it works well, there are few missing features compared to Stanza. Turning the ipod touch while running the Kindle application does not display the book in landscape mode. I could not change the typeface or adjust the margins.

I suspect more features will be added in upcoming versions.

Yeah, I had exactly the same experience. I dl'd Stanza, found it a great app but book selection didn't satisfy me, then, BAM! Kindle for my Touch is available. I concur with your opinions and insights in this review, and I am reading new books on my NYC Subway commute every day on the Touch (which I can do standing up, sometimes a book is a space issue). I thought the small screen might bother me, but it doesn't.

Thanks for a great laugh for today. John H. reading "Speed Dating"! I understand the sacrifices you must make for science.

John, Your consolidation prompted me to do the same. I've chosen to center on my iPhone as the single device for all matters. I shared my experiences (as you did) in a post entitled "Going Digital: How I started to live a Science Fiction life". (http://is.gd/ogi2).

Going e-reader on my iPhone was really the last step that made me commit to this strategy. I have both Stanza and Kindle on my phone, but agree that Kindle has some catching up to do.

At the moment, I'm considering replacing my alarm clock with my iPhone by putting a charger beside my bed. We'll see how it goes.