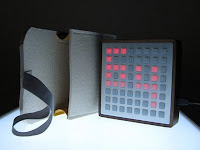 Last Thursday, I flew to Houston to keynote Pri-Med and sat next to Kedaar Kumar, a composer and sound designer for Harmonix.

While flying, we talked about my Shakuhachi playing and Zen ideals. Kedaar is also a vegan, shares many of my philosophies, and uses a unique IT approach to composing, called the Monome, which is my Cool Technology of the Week. The Monome is a hand finished wood block with 64 backlit buttons.

The device has a USB 2.0 interface supporting serial, midi and open sound control. The buttons can be configured as toggles, radio groupings, sliders, or organized into more sophisticated systems to monitor and trigger sample playback positions, stream 1-bit video, interact with dynamic physical models, and play games. Button press and visual indication are decoupled by design: the correlation is established by each application.

There are numerous applications which exercise the Monome as a simultaneous input and output device, including

* 64step is a versatile step sequencer aimed at fluid composition and editing.
* mlr is a sample-cutting platform intended for dynamic and performative live manipulation.
* life is an interactive version of conway’s original simulation.
* phoenix is a probabilistic arpeggiator with a drawable waveform.

All related software is open source. This includes the embedded code, routers (monomeserial, serialio and mapd), and applications.

Kedaar demonstrated 7up, an application written in Java that enables the Monome to communicate with any midi-enabled software synth. The primary goal of 7up is to create a self-contained music composition suite where all instruments/controls/samples/loops/etc are intuitively accessible from the Monome itself, eliminating the need to use software on the computer.

Here's a video of the Monome in use.

It's a remarkable bit of engineering and one of the most creative user interfaces I have ever seen. Definitely cool!
Posted by John Halamka at 3:00 AM

can you please try this book for your kindle and review it before I fork over 100 dollars for it? I'm an in debt medical student.

All related software is open source. This includes the embedded code, routers (monomeserial, serialio and mapd), and applications.