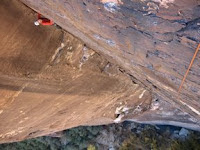 It's Thursday, so it's time for a personal introspection blog.

At times I get quizzical looks for being vegan, playing the Japanese flute, or wearing black. However, the most unusual looks from my peers occur when they see photos like this one of Dark Shadows on Mescalito North in Red Rocks, Nevada.

Winter mountaineering is a good way to get away from your cell phone (the battery life is 2 minutes at -40F), but why climb a rock?

Think of climbing a mountain as a giant Rubik's cube - a wonderful mental exercise. Climbing requires a well orchestrated combination of gear, route finding, movement, and teamwork to make it to the top.

Here's how it's done.

1. Make the approach - some climbs are a 5 minute walk from the road and some are 10 miles through bush, over stream crossings, and up thousands of feet. The Grand Teton is usually a day of hiking followed by a 2am departure which puts you at the base of the technical portion of the summit pyramid at sunrise. The climb to the top takes until 8am or so, enabling a retreat before the usual afternoon thunderstorms hit the summit. Many Yosemite approaches, such as Half Dome, require hours of tricky route finding on poorly marked trails before the climbing begins. Of course, you must carry everything with you - climbing shoes, harness, rope, food, water, and extra clothing during the approach.

2. Prepare to climb - At the base of the climb, you put on your harness, unwind your rope, put on your climbing shoes, and do safety checks with your partner. Safe climbing requires at least two people - one to climb and one to control the rope, catching the leader if a fall occurs. Once gear and knots are checked, climbing can begin.

3. Lead the pitch - The leader uses a combination of footholds, handholds, cracks, and friction to climb up the rock face. Every 10 feet or so, the leader places a piece of protection into a crack and clips the rope to that protection. Modern climbing is "clean climbing" that does not involve pitons or any gear that damages the rock. Spring loaded cams, metal nuts/stoppers, and slings around natural features such as trees provide temporary protection that support the rope so your climbing partner can catch a fall.

If you consider the physics of leading, it's where the bulk of the risk of climbing occurs. If you place a piece of protection every 10 feet, you'll fall 20 feet if you slip off the rock, since 10 feet of rope to the last piece of protection means you'll fall 10 feet below that piece before you stop. A 170 pound climber falling 20 feet generates a lot of force on the climber's body, the rope and the person controlling the rope.

Routes are divided into segments of under 200 feet in length because that is the length of the most common climbing rope.

Route difficulty is graded on a scale from 5.1 (climbing a ladder) to 5.15 (basically climbing an inverted slab of glass with butter on your hands). I lead 5.8 and follow 5.10a, which is climbing a vertical to overhanging wall with dime-sized handholds and footholds.

5. Bring up your partner - When your partner climbs, it's called seconding the pitch, since you were the primary or lead climber. Seconding is not particularly risky because you are supported by a rope from above if you fall. Mentally its easier but it has the same physical challenges as leading the climb.

6. Repeat - My climbing partner and I do swinging leads, alternating leading and seconding, so we each take half the risk. We do this until we're at the top of the mountain. Some major climbs in Yosemite can be 15 pitches or more, which can take half a day to climb. We do not typically do "big walls" which require you to sleep on a portaledge strapped onto the face of the mountain. We'd rather have a very long climbing day and then descend before nightfall.

7. Descent - In some ways, descent is the most dangerous part of the climb. Rappelling down the mountain is risky because a gear failure means death or injury. When we're climbing up, we typically do not fall - the gear is there for safety just in case. When you rappel down the mountain, the gear is all that is keeping you from falling. For this reason, we typically walk off most climbs, down hiking trails rather than rappelling. We always carry headlamps and a rain jacket in our packs when doing long alpine routes, just in case we're delayed or trapped by a storm.

In the US, places like Red Rocks, Nevada; Joshua Tree, California; and the Tetons, Wyoming are extraordinary. However, nothing quite measures up to grandeur of Yosemite and the Eastern Sierra. My Yosemite climbing schedule this year is

Rock climbing is an incredible way to focus the mind, experience the outdoors from a new perspective, build teamwork, and work with technical gear all at the same time. As I age, the routes I'll attempt will likely get easier, but whether they are 5.5 or 5.10a, the joy of a mile of air under your feet is the same!
Posted by John Halamka at 6:00 AM

Looks like you will be one busy climber. Hope you acclimate well, and watch the weather!

great summary of climbing. i've been on the sharp end for 12 years now and have climbed on five continents and all over the us (including a few ascents at the gunks). arapiles, yosemite, red rocks, nrg, verdon, arco, patagonia, thailand, china, squamish, jtree, bishop - i get around.

climbing is a fantastic metaphor for so much, and an exciting way to reduce much of your life to very simple decisions. put foot here. put hand here. trust yourself. trust your partner. make the move.

a great way to focus on the rewards of an activity, not merely the risks.

(great summary of your dell visit as well. i'm on the HCLS channels team working for jamie coffin out on the west coast)

ps: if you can fit mathes crest into your valley itinerary. i was all smiles on it last time.

i'm training for a nose attempt in either june or september depending how well my shoulder holds up and how much time i can scrape away from dell. a much anticipated return to indian creek is also scheduled for early may.