In my first few days volunteering at Mayo Clinic to meet colleagues, establish collaborations, and better understand the amazing patient services Mayo provides throughout world, I had the opportunity to tour the historic Plummer Building with Douglas Holtan,  chair of the Department of Facilities and Support Services.  Immediately, I realized the building is Mayo's first platform.

In my last post, I described a platform as a way to use knowledge and technology to facilitate connections, creating value in the process.

How could a building be a platform?

To understand that, you need to understand the past, provided to me by Matthew Dacy, creative and administrative director of the museum of Mayo Clinic.

Henry Stanley Plummer, M.D. (March 3, 1874-December 31, 1936) was a prominent internist and endocrinologist in the founding generation of Mayo Clinic. With his interests in medicine, engineering and the arts, colleagues considered him a "diversified genius" whose example remains an inspiration for innovators at Mayo Clinic.

He recognized the limits of the previous heterogeneous system in the Mayo practice. Each physician had his or her own ledger, limiting continuity of care when a patient had a return visit.  It was extremely difficult for multiple physicians to collaborate in the care of a single patient.

What did he do?

Dr. Plummer designed a  unified record and numeric registration system to benefit each individual patient while also accommodating a virtually limitless capacity of total patients in the system.

He created the record within the construct of the Mayo brothers’ philosophy that the needs of the patient come first and that a union of forces (diverse skills applied to shared purpose) would best serve patients.

He sought technology best practices from other industries (pneumatic tubes from department stores, etc.) and installed them in the Plummer Building, which opened in 1928 and became the model for subsequent Mayo Clinic facilities, creating universal connectivity between those who produced information and those who needed it.  The system provided “just in time” access to information – as patients moved about the clinic between departments, the record would move via conveyor belts and drops, following the patient. 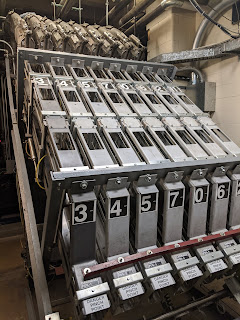 Here's a schematic illustration of functions and processes in the Plummer Building. Equally important, these systems are enveloped in stunning architecture with marble and other features from throughout the world. 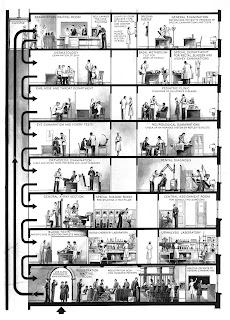 Dr. Plummer standardized and optimized critical components, insisting on paper with high cotton content for durability, demanding precision paper thickness since large volumes would need to be stored and selecting official long-lasting “Mayo Clinic ink” that could be used in a wide range of fountain pens.  The end result was that information had durability, integrity, and availability.

He established strictly maintained institutional process and policies for record creation, dissemination and storage. As a result, very few  records were ever lost or misplaced.   The end result was that security and privacy were maintained despite the broader sharing of information.

He expanded the system as needed with additional cards and documents , using color coding and other techniques for ease of recognition and access.   If effect, he added new  "apps" to the healthcare information ecosystem.

This unified record platform with its universal connectivity, availability, integrity, security, and scalability had a symbiotic relationship with the comprehensive Mayo Clinic general exam, advancing the standards of diagnosis, treatment and prevention of illness.   It supported research, quality measurement, and population health.

Fast forward from 1928 to 2019 and you can see that first Mayo Clinic platform in the Plummer Building inspired the next Mayo platform which seeks to connect information producers with information consumers while insuring data integrity, security, and innovation agility.   It's an update for the digital age of the foundation laid by Dr. Plummer.

In my upcoming posts, I'll provide comprehensive detail about all the novel components of the new platform and the services that will cure, connect and transform healthcare throughout the world.

For me, the Plummer Building is the inspiration for the work ahead.
Posted by John Halamka at 1:11 PM