Over the past few weeks I've been writing a few journal articles and finishing a book, so my blog posts have waned.    They will start again soon.   In the meantime, my mother is visiting and here is her guest post. 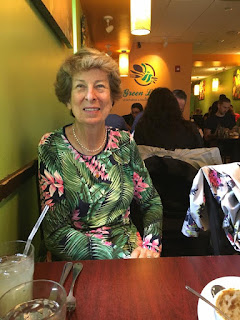 The beauty here is infinite - wildflowers everywhere, gushing fountains in ponds with swimming ducks and geese and vast amounts of greenery because of the frequent rain.  60 acres of enchanted forest  that even "House and Garden" magazine could not duplicate surround the farm.  Roosters begin crowing about 4:30am. A very slow moving freight train provides a marvelous whistle several times a day as it moves through the countryside.

Today was Blueberry picking day at Unity Farm.  It’s hard work!  An hour and a half of picking rendered one bucket (I ate a "few"). I am renegotiating my contract!

Palmer, the turkey, followed us around all day - wherever we went. He extends his plumage often so we can admire how grand he is. When I returned with the blueberries, ALL the geese greeted me with extensive honks (males) and hinks (females). I think they believed I had food for them.

We streamed "Lion" yesterday evening. I highly recommend it. A beautiful story with an
endearing plot theme.

We visited the new "age restricted" (over 55) condominiums at Abbey Road - just 500 yards from Unity Farm on the trails through the sanctuary. I was immediately surprised by the Revolutionary War era cemetery in the front of the development.

Tuesday, the local Garden club will come to Unity Farm for a potluck. Kathy admitted they will
market living in Sherborn to me.

I decided to walk to the post office.  I was sauntering back when a torrential rainstorm appeared, seemingly out of nowhere. Kathy drove down in the car and truly rescued me.

Dinner with John’s daughter was at a Japanese restaurant in Wellesley. They lived
there before moving to Sherborn. So it has sentimental memories for her.
More tomorrow.
Posted by John Halamka at 8:15 AM

Not only a great Guest Post but also now loyal readers know that no calamity has struck Unity Farm since the dearth of updates was beginning to cause concern!