When you run a sanctuary, you need to be agile.   We received a message that we had until 1pm to rescue a heritage turkey or he would be eaten.   We drove the Unity Farm van to pick him up and  within 2 hours he was living at Unity Farm Sanctuary.   Meet Palmer, a 2 year old Royal Palm turkey He’s social, friendly, and very interactive.   He gets along with all the other birds, the dogs, and pigs.  I was able to pick him up and move him into the barnyard without a struggle. 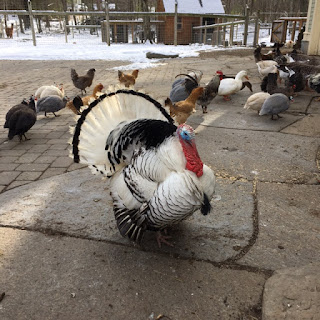 Although we now have over 150 birds, we have little experience with turkeys.   We let Palmer choose his first roosting spot and he decided to go high - to roost on top of the chicken coop the first night and on top of the goose/duck pen the second night.   At this point, he’s very relaxed around all the other birds and spends most of his time with the guinea fowl.    You can now hear his “gobble gobble” sound throughout the property as he free ranges over 30 acres.

Although the temperatures have become cold again and snow is falling, the birds are all laying again since the days are growing longer.   Here’s what a typical trip to the coop brings - everything from pullet “fairy eggs” (small) to goose eggs (large). 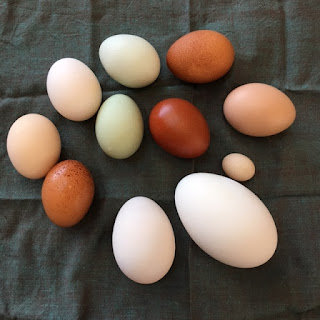 Kathy and I have begun to layout the new pastures and paddocks now that we’ve cleared an additional acre for animals.    The sanctuary could potentially house almost anything, so we made a list of all the creatures we may be called on to rescue

so we’ve designed a set of paddocks that can flexibly accommodate all these species, while preserving biosecurity and ensuring everyone gets along.

And what’s this about emus?   Kathy and I have used the term “elephants and emus allowed” to describe the flexible farming regulations of our town.    When I rescued the turkey, here’s who I found living with him. 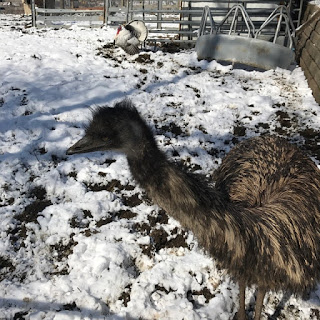 We’ve heard about 2 emus that may need a new home.    Since they run 30 mph and are about as large as a human, keeping them safe and happy could be a challenge.

This weekend we’ll be continuing our work on the new paddocks, preparing for even more snow, and doing some of the last repair work on the sanctuary building - grouting the kitchen counters, repairing  broken screens, and rewiring the dining room to install the original lighting fixtures, which were recently donated to the sanctuary by a previous owner.    Over the next few weeks, I'll post a virtual tour of what the fully restored sanctuary looks like, room by room.
Posted by John Halamka at 5:26 PM