Running an animal sanctuary requires constant attention to the care and well being of all the creatures living there.   This week, Pippin, our 30 year old Welsh pony stopped eating hay and required urgent intervention.    He did not appear to be suffering from colic.  He ate treats and sweet grain, which we minimize because of his Cushing’s disease.   We knew he had numerous dental issues but to evaluate the situation he needed to be sedated.   The vet figured out he had a loose tooth that prevented him from chewing grasses.    She removed the tooth, placed him on antibiotic coverage and gave us two nutritional supplements to help him get back on his regular diet.    As an older, thin pony, he lacks reserve so we’re very focused on increasing his caloric intake, maximizing his weight gain over his Cushing’s treatment.   I’ll report back on his progress over the next week.

Community events at the sanctuary have begun with yoga classes and meditation classes meeting in the Unity Meeting House.   All the floors in the building have been freshly refinished and the odor of polyurethane has faded.   Daily fresh air ventilation and a bit of incense has made the building very pleasant.

Only two rooms in the building had carpeting and we’ve replaced all with pre-finished wood in keeping with the 1830’s look of the original building.    Kathy will hold an art retreat in the newly finished third floor space next weekend

We’ve also continued repainting the entire inside of the building using beiges and blues consistent with the older finishes.   All the remaining wallpaper from the 1980’s and 1990’s will soon be replaced with the vintage paint colors.

We’ve carefully inspected all the exterior wood surfaces and we’re replacing anything rotted/decaying with azek, especially anything at ground level.     The work on the wiring, plumbing, telecom, audio, and security will be done by next week.

Over the past 50 years, workman have left pieces of retired heating ducts, electrical boxes, and lumber in the crawlspace below the house.    Using my toughened mountain climbing clothes, I’ve crawled through every square foot under the house and bagged up all the debris.   Another few hours of work next weekend and the entire crawlspace will be as it was when the house was first built.

Hopefully our efforts in March will focus on the animal housing and paddock areas - we’re hoping for cool, dry weather to make it possible for us to finish clearing fallen logs, rocks, and brush, enabling us to begin the new fencing  which will surround the new rescue areas.

This week, we built a new “toy” for the goats - a 4x4 foot platform, 18 inches high.   They play king of the mountain, climbing on the platform and knocking each other off until only one is left.   Typically Napoleon wins the battles.   He’ll even carry a pine branch onto the platform, so he can enjoy a snack while surveying his domain.

Next week I’ll be in Japan lecturing,  meeting with government/industry/academia, and spending time with old friends.   Kathy will be running the farm and sanctuary operations with the help of our growing team of volunteers, interns and helpers.    I’ll be in constant touch, ensuring all is well. 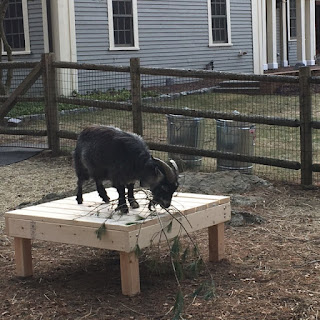