I’ve been in China this week, so Kathy has been running Unity Farm.    As usual, the farm continues to be an ever evolving and exciting place.  Here’s a typical email from her

“Many visitors were here today.   Our young intern was here helping out for an hour, then at 4:30pm someone dropped off a 5 year old pair of hens, then a person dropped by to spin honey from their hive.    You never know what each day will bring”

She’s received several more rescue animals this week and she’ll decide which animals which will live permanently at Unity Farm and which will be placed at other farms.    I’m working on a business plan for the Unity Farm Sanctuary, having learned a great deal about grants, fund raising, and the sustainability of sanctuaries from reading other’s experiences 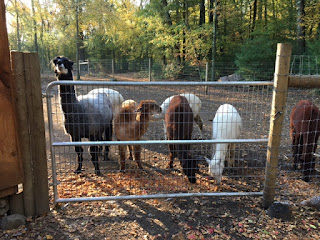 We’ve been expanding our capabilities to receive an increasingly diverse array of species, such as birds that cannot be released directly into the wild. Here’s a picture of the new aviary we’re building.  I’ll finish it next weekend after I return from my travels.     We’ll be ready for various rescue birds once we receive our state license to host them. 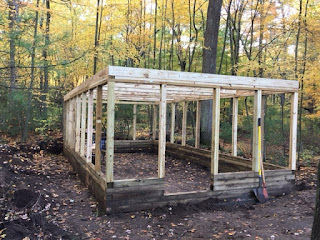 Kathy has been tending our cider fermentation and the 2016  vintage is shaping up to be a very flavorful, well balanced product.     We have 500 pounds of apples left in the cooler and I’ll press them when I return.   Here's our new growler design. We’re always learning about the land and the history of the landmarks we’ve discovered on the farm.   A few years ago, while clearing trails, I found a slate gravestone sitting in a grove of old cedar trees labeled

Who was James Bullard?   He was “Johnny Tremain”

When I was an elementary school student, I read the story of a fictional 14 year old living at the time of the revolutionary war and his impact on those events.   James Bullard was 14 years old in 1776 and he tended the gunpowder for the minutemen in the  Sherborn area.    On June 30, 1828 he had “apoplexy” and died instantly at a spot not far from our barn.   Apoplexy could be anything from a heart attack to a stroke.   At his funeral all the town families toasted rum in his honor, then shortly thereafter decided  to ban all alcohol from the town.    When James died, so did alcohol consumption in the town.    Here’s the story of the his gravesite at Unity Farm as written by a member of the Sherborn Historical society.

This weekend, I’ll be in New Zealand and Kathy will plant the 2017 garlic in our large outdoor beds.   I’ve promised that she can take a vacation when I return from my October travels.   Some people say they look forward to retirement so they can travel.   I’m not sure what retirement is, but I can only hope the travel is less!

How interesting that you learned about James Bullard/Johnny Tremain in elementary school on the west coast, then move to the east coast and find his gravestone on your property.....

Always enjoy reading your blog! (And for those of us still on the West Coast, we anxiously await the ability to order your products on-line!)

Kathy and John. I just read the the history of the engraved stone on your property. When Bill and I were there and saw the stone I was quite taken with the thought of a grave sight on your property.I went back to see it again but could not find it even what seemed minutes after John showed it to us. I love knowing the history. Thank you. And I remember Johnny Tremaine to probably from the Disney movie.