Hurricane Hermine came and went, dropping only 2/10ths of an inch of rain on the drought parched soil of Eastern Massachusetts.   Although we had 20 mph wind gusts, none of the stressed trees were knocked over.

We’re continuing to irrigate our crops using our 60 zones of drip irrigation, while trying to preserve the well.   We’re praying for rain.

We’re always learning at Unity Farm.   This week’s question - can a pig get cyanide toxicity from eating peach pits?    Each week we receive the discarded fruit and vegetables from Tilly and Salvy’s farmstand, feeding them to the pigs, poultry and alpaca.    Hazel Marie, our 200 pound pig (picture below) loves to crack open the peach pits with her strong teeth and eat the kernals inside.    I’m told they are bitter, so the behavior seems strange.    Of concern is that peach pit kernels contain cyanogen glycosides in the form of amygdalin.   From all my reading, it appears that Hazel would have to eat a dozen or more peach pits at a time to have a problem.  Nonetheless we’ll stop feeding stone fruit to the pigs since the last thing we want is piggy peach poisoning (ICD10 T62.2X1A  and T65.0X1A) 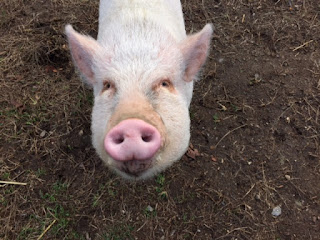 Unity Farm would best be described an organic animal community.   Although rescued animals are added on an ad hoc basis (we were called to rescue a chicken blown from its home by the Hurricane), all the others have been added throughtfully with a  introduction period in an isolated barnyard pen before release.    The end result is that everyone gets along.  Here’s a typical barnyard scenne - the pigs, chickens (including bantams) sharing dinner together while a baby alpaca snacks in the distance. 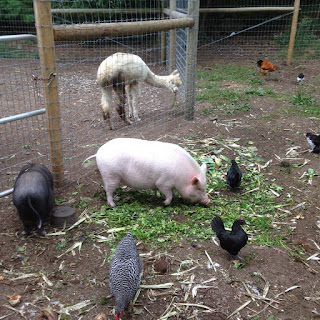 This week we harvested the last of the tomatoes and we’ll soon finish up the peppers and eggplant, leaving us with 15 beds for lettuce, spinach, and carrots.      We’ll be crushing apples for hard cider soon, although its been a tough year for apples with the unexpected spring freeze and the summer drought.   Then again, the joy of farming is working with the animals and plants throughout the seasons, responding with agility to whatever nature brings.

This weekend we’ll be bagging compost for sale, and checking our forest plantings for ginseng growth.   We planted 15 beds of ginseng in isolated forest locations and if they were successful now is the time to check for their red berries of late summer.    I have a feeling the drought might have diminished our ginseng experiments but we’ll know more soon.
Posted by John Halamka at 3:00 AM