It’s the peak of summer with 90 degree temperatures and humidity that pushes the heat index to 100F.   We’re also in a drought, so we’ve had to aggressively water the orchard, berries and hoop house.      When we built all our agricultural areas we installed drip irrigation or microsprinklers as appropriate for the type of plant.    Around the farm we have 64 irrigation zones.

The cucumbers, peppers, blueberries, and basil are all ready to harvest and we’ll be bringing them to the Tilly and Salvy’s farmstand this weekend.    Our blueberries are divided into 3 separate zones - early, mid and late.    Each is covered with netting and the ripeness of the fruit is directly related to the motivation of birds to get through the netting.   This little guy - a sharp shinned hawk  got into the blueberry patch by digging underneath the netting and could not get out, so we had to carry him to safety. 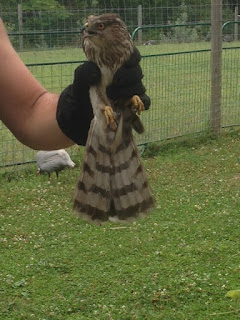 There are always many raptors around Unity Farm - here’s a Cooper’s hawk watching for voles in the meadow. 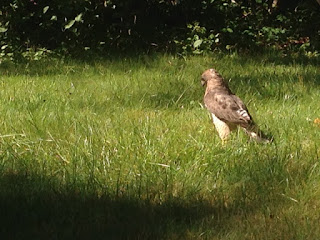 As a rescue farm, we often take in animals that cannot stay in their current home.  This week, Bob arrived.  He’s a kind, gentle rooster that has such an endearing personality that the other roosters do not considering him a threat. 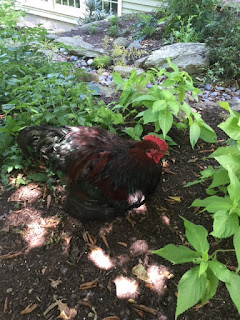 We’ve been finishing up the compost screening machine.   It’s very frustrating that no commericial devices to sort and screen compost are available for the small farmer.  Our finished design uses a 1725rpm motor and two sets of reduction pulleys to turn a bicycle rim at 30rpm.  It works perfectly.  Here’s a picture and a video.   The key was a lego-like Powertwist V-belts that adjust to any length. 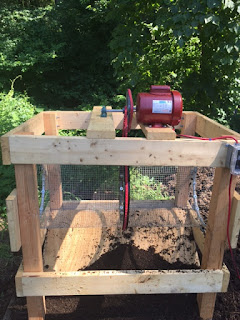 We’re finishing our certification program in organic farming at Umass Stockbridge over the summer by taking Botany.   It’s been a great course thus far, with online discussions of Michael Pollan’s Botany of Desire, a review of the science of growing plants, and reflections on the human role in the life of plants.   On August 19th, we’ll graduate from the program and we can add a new credential to our degrees from Staford, Harvard, MIT, UCLA, and Tufts - a farming certificate from Umass.    You can guess which one was the most satisfying.

We'll be spinning honey this weekend, since our 30 hives are at the peak of production.    We always leave 80% for the bees.  Here's what the bee yard looks like. 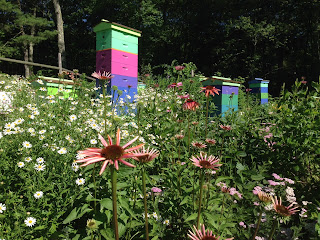 This weekend, we’ll be hard at work finishing up our non-profit corporation paperwork.  Our hope is that Unity Farm Sanctuary Inc. will be approved by the IRS as a public charity so that we can ensure it provides educational services, animal rescue, and environmental preservation for generations, even beyond the lives of our family members.    We’ve completed every other government designation we’ve tried - bonded winery, organic certification, commercial kitchen, and designated agricultural property.  Let’s hope the public charity application is compelling!  Even the chickens have volunteered their time as farm hands. 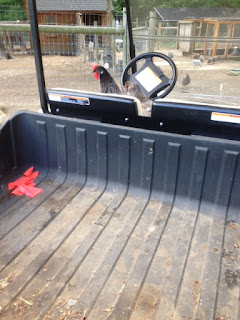 John - Like your compost screening machine. I've built a related, but non-motorized screener for material I dig out of my backyard, which is a glacial moraine, about 50% pebbles and small rocks. Digging a small pond produced nice gravel to use under and behind retaining walls (I'm on a hill) and good soil to mix with compost for plantings. Everything I need is there ... it just has to be separated ... by hand in the case of my soil screener. Gary