When running a farm you sometimes feel like MacGyver - given a few 2x4s, a piece of hardware cloth, and a box of bags, create a compost bagging machine. 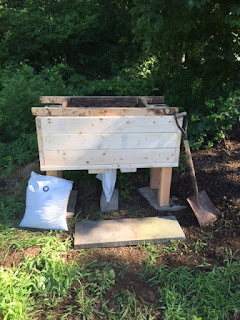 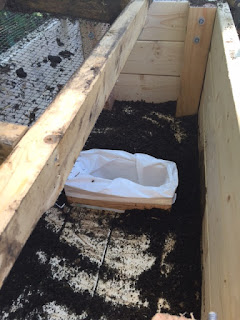 Every year, we produce about 10,000 pounds of organic compost from alpaca manure (a 16:1 carbon to nitrogen ratio) and timothy hay (a 45:1 carbon to nitrogen ratio), resulting in a perfect blend of Unity Farm “Llama beans” which has a 25:1 carbon to nitrogen ratio.   Alpaca compost has been described as “gardener’s gold” because of its perfect balance of nutrients.    One cubic foot weighs 33 pounds, so we can produce 300 bags for sale each year.  How do you bag 10,000 pounds of composted manure - the prototype is shown above.    10 shovelfuls of compost onto a sifting screen of 1/2 hardware cloth results in one cubic foot of fine compost in the box below.   At the bottom of the box is a cutout for polypak heat sealable bags.   Just move the compost into the bag, then set it in the heat sealer.      We’re planning to retail it for $9.99 per 33 pound bag at Tilly and Salvy’s farmstand

Our next step is to add a motorized trommel so that the sifting is done automatically.

Our early blueberries are just about ready to pick - all our netting is up so the blueberries, gooseberries, and raspberries are protected from the woodchucks, birds, and squirrels. 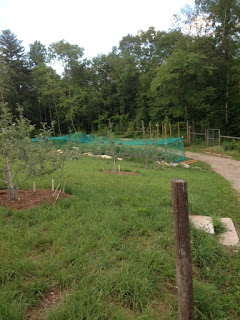 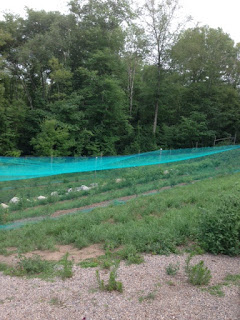 We’ve been hard at work hatching poultry and raising chicks.   At this point, we’re ready to integrate the oldest chicks with the adults using our mini-coop, the inserts I built into the large coop to isolate new arrivals from the adults.   After a few weeks in the mini-coop, they’'ll be ready to free range.   Although we generally try to limit the number of guineas we add each year, this summer we’re adding 18 birds with entirely different genetics to the flock.     Since our current flock is 60 birds descended from an original cohort of 11, it seems reasonable to add some diversity. 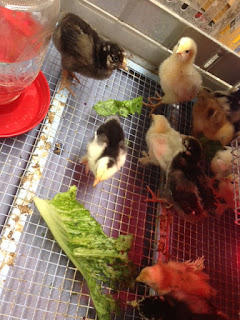 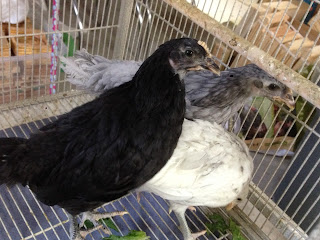 We’ve been very lucky with all our creatures and typically only lose one or two birds a year to coyotoes, hawks, fisher cats, foxes and racoons.   This week, one of the female guineas decided to build a nest in the forest and not return to the coop.  Unfortunately we found a large collection of features in the orchard which suggests the nest was raided during the night and she was eaten.

Now that we’re selling organic fruits, vegetables, mushooms, compost, and herbs, you’d think we’d make a small fortune in farming.   Although that’s true, remember, it requires a large fortune to start and operate the farm.  Margins are razor thin.    We measure our income, not in dollars but in job satisfaction!

This weekend we’ll be spinning our first Summer honey  - at least 60 pounds.   With our current 30 hives, we expect about 1200 pounds of honey every year once the colonies are fully established.