Stormaggedon arrived this week.    Heavy, wet snow covered the entire farm like a paste, breaking trees, puncturing holes in the hoop house, and taking out power for more than 100,000 households in Massachusetts, including Unity Farm. 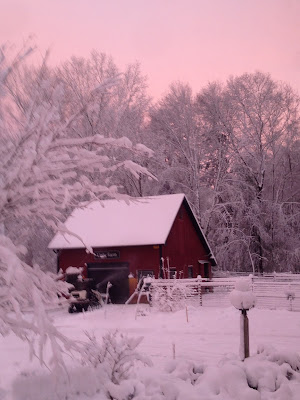 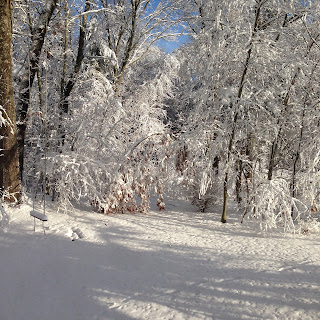 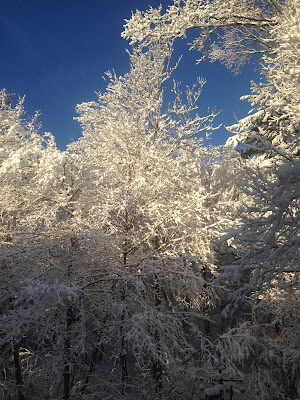 Power failed at 10am on Friday and was restored at 10pm on Sunday.

Three years ago, we installed a 20 kilowatt backup generator, fueled by 6 tanks of propane with the idea that we could run the farm for 2 weeks without grid power.   Kathy and I do not mind the cold, dark, and inconvenience, but the 150 animals at Unity Farm would definitely not do well without water, light and their daily routines.

The generator powers all the outbuildings - barn, coop, duck/goose house, sheds, and cider house.   When we did the initial wiring, we did not have pigs, so the pig barn was without power for 3 days.   We wrapped the pigs in blankets (really), gave them extra straw, and fed them their favorite snacks, all in an effort to keep them warm.    Their “sweeter heaters” normally keep the pig barn above freezing but without power they had a chilly Friday night at 20F (we have temperature telemetry in each of the animal spaces).   We checked on them frequently and they came through the weekend without a problem.    We’ve already contacted an electrician and we’ll take our own bedroom off the generator if needed to keep the pig barn warm.

The hoop house also is not on the generator.   That was not a problem previously because it is heated by sunlight.  However, now that we’re germinating all our spring seedlings, there is a heat mat that needs power.   I hand carried 300 seedlings up to the house to keep them warm over the weekend.

Other than cold pigs and seedlings, the three day power outage was not a significant problem.    We had water, food, and light everywhere we needed it.   We used the Terex front loader to clear the heavy thick snow. 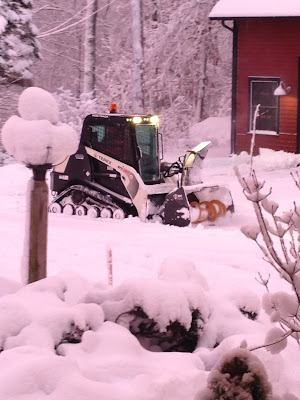 I learned a bit about the grid during the restoration process.   Unity Farm is on a lateral from the main line which serves only three customers - two farms to the west of Highway 27 and one farm to the east.   The connection from main to lateral uses a 7000 volt fuse housed in a “fuse door” on a “fuse cutout”.     When the fuse blows, the “fuse door” hangs down from the cutout, indicating an interruption.     Here’s a photo that illustrates the issue 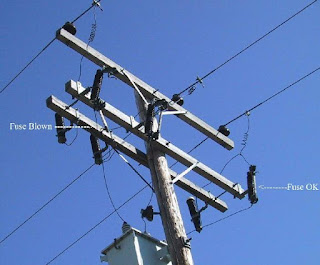 Thanks to Brian from Eversource for teaching me about high voltage grid engineering.  I can now diagnose any local electrical outage problem.

During the outage, the pigs did try to make a break for it, however.   On Saturday, Kathy ran into the house and told me that Hazel (120 pound pig) was running into the forest.   Pigs are incredibly smart and she figured out how to lift a gate off its hinges so she could forage in the woodland.    I grabbed an apple (her favorite food) and she followed me back to the pig barn.   After a quick trip to Home Depot, I outfitted the pig gates with nylon lock nuts.

During the storm, we had 40 mph winds and at 4:30am on Sunday, one of the barn windows blew in - the old sliders on the window frame sheared off.   The dogs raised an alarm and when I got to the barn, I found the window in pieces about 20 feet away from the wall.   I used ten 2.5 inch wood screws to attach a piece of plywood over the window frame, resealing the barn against the storm.  Over the next few weeks, we’ll remove the barn windows and replace all the old sliders.

As part of my Umass course in organic farming management, this week I reflected on the record keeping I do every week on the farm.   Some people use sophisticated digital applications.    Some use spreadsheets.    I use notebooks - see the photo below.  I realize this is very out of character for a technology guy, but I think of the farm as a living laboratory.  What better way to document the daily events than lab notebooks! 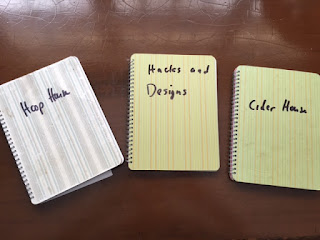 This weekend we’ll have temperatures as low as -10F without wind chill.    I was going to plant our peas, beets, and other cold weather crops, but I have a feeling that even in the hoop house, the soil will be frozen solid.    We may spend Valentine’s day in front of a fire, doing our best to keep all the animals, plants and ourselves warm throughout the day.
Posted by John Halamka at 3:00 AM