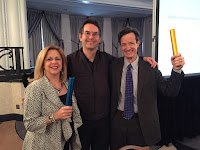 After 10 years of work, today I passed the baton of leadership for US standards harmonization efforts to Arien Malec and Lisa Gallagher.   Here’s  a brief synopsis of the journey.

In 2005, Fran Schrotter, COO of ANSI, met with me in my Harvard office and asked if I would be willing to spend a few hours per YEAR chairing the Healthcare Information Technology Standards Panel (HITSP), a public/private partnership run by ANSI at the request of the federal government.   I agreed and within a few months, standards harmonization became a multi-hour per DAY commitment.

HITSP convened many stakeholders and worked directly with the Secretary of Health and Human Services, Michael Leavitt, via the American Health Information Community (AHIC).   Controversies at the time included the integration of the Continuity of Care Record (CCR) with the HL7 Clinical Document Architecture (CDA) to create the Continuity of Care Document (CCD/C32), debates about the right terminology for problems/medications/allergies, and selection of structured lab data reporting implementation guides.   Standards were harmonized and progress was made, but much work was left to do.

HITSP ended when the Obama administration began and was replaced by the Health IT Standards Committee (HITSC), a Federal Advisory Committee.  I became co-chair with Jon Perlin and the committee was populated with a diverse group of stakeholders, many of whom had served HITSP.    Controversies included the refinement of document content standards (CCDA), the broad implementation of vocabularies (Value Set Authority Center), and the decision to use SMTP/SOAP (Direct) as transport.   In 2015, the movement to FHIR, REST and OAuth/OpenID accelerated.   Government driven regulatory change began to shift to private sector driven innovation.   Much work is left to do.

What advice can I offer to Arien and Lisa?

As I handed actual running batons to them, here’s what I said:

Welcome to the leadership of the HIT Standards Committee.   You now have the privilege of facilitating the harmonization of standards nationwide.    Everything you say and write will be deemed influential.   You will aggregate karma - some good, some bad .  You will receive credit for things you did not do, while also receiving blame for issues you had little to with.

Just as in my days running track, my task has not been to win this race, but to avoid slowing down those who come after me.

It has been an honor to serve.

Thank you Dr. Halamka for all you have done. Like other pioneers you have shown the way and cleared the trail for others to continue the journey. Though there's plenty of hard work yet to do, you've led the industry through the difficult process of gaining commitment and consensus to get this huge ball rolling. What seemed almost impossible 10 years ago is now becoming reality.

I'm sure your voice will remain in the HIT conversation, and the good work you and your team do at BIDMC will continue to show the way for others to follow.