Living on the farm means that every day is an adventure.   As Forrest Gump said, “you never know what you’re going to get”.

Last Thursday evening, at midnight, the Great Pyrenees began to bark with a cadence and volume that indicated a serious problem.   The llama began to trumpet.   The guinea fowl began to "buckwheat" inside their coop.    The ducks and geese quacked and honked.

I grabbed a flashlight and ran out to the barnyard.   A pack of 12 coyotes was circling the alpaca paddock, howling at the top of their lungs.  There were old, adolescent and young coyotes all making menacing movements toward the alpaca.

The coyotes and I have a tenuous relationship.    Like other predators, I know they are the top of food chain and play a valuable role in the ecosystem.   I’m a vegan and do not want to kill/injure any living thing.

When a single coyote appears in the barnyard I chase it away (or the guineas gang up on it).    With a pack of 12, I was a little less sure of myself.    I immediately began yelling at the top of my lungs I broke a few thick branches across a tree trunk, making a very loud noise.     I do not own a firearm (although Kathy and I are licensed to do so), and recognized my options to defend the animals were limited.

I threw rocks at the trees/bushes in their general direction, further creating noise.  They backed off.

Did I know what I was doing?  No?  Was it the right thing?  Per WikiHow, I did everything right when encountering a coyote pack.

The coyotes have not returned and all the animals are safe.

Keeping predators away was important this week since we released our eight week old chickens into the barn yard to free range.   We released

that we had been raising in our mini-coops from 1 day old chicks.

They are running all over the property (including a rest on the air conditioners) and each night have come safely home to the coop. 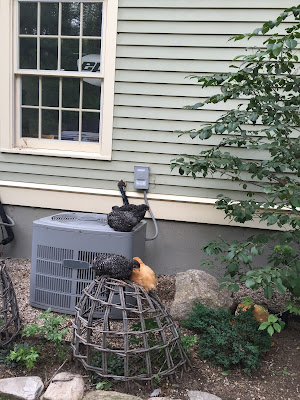 With the mini-coops empty, we moved the last of our baby chicks (Ameraucanas) to the mini-coops and we moved 7 pheasants to the chicken pen, where they will mature until they are 16 weeks old and we can release them to the forest.

The geese continue to patrol the property and act like watchdogs.  This week they learned to swim but they still aren’t sure what to do with running water (streams are scary)

The bees continue to make honey, capturing the last of the summer nectar from the wildflowers around the farm, including this grove of mint. 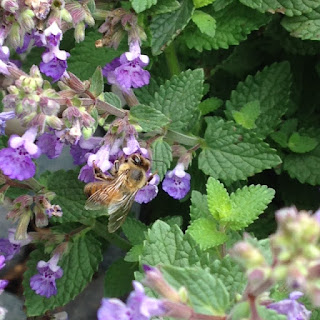 We’ve completed the picking of our strawberries raspberries, gooseberries, and early blueberries for the season.   The mid-blueberries should be picking next week and the late blueberries in August.

Our coursework at Umass is going well.  I’m learning a great deal about the role of temperature, humidity, ethylene, O2/CO2, and physical handling of vegetables post harvard.

As Kathy and I think about our strategic plan for the year, we’ve both agreed that we must be careful not to produce too much of any one commodity and find that farm life has become a burden instead of a joy.   We’re working on refining our daily routines, automating processes, reorganizing workflows, and thinking about the right tools that will simplify our tasks.    At the moment, I’m adding a 16 cubic foot trailer to the barnyard so that we can more easily haul manure to windrows in the orchard instead of composting thousands of pounds of manure for months then moving it in mass.   I’m considering another hoop house just to keep the farm equipment organized and out of the elements.  I’m refining the layout of the barnyard.

Just as a hospital would re-engineer its business using toyota production techniques (LEAN, six sigma etc), we’re doing the same.   Who would have thought that engineering ideas would be so useful in an agricultural setting!

I'm surprised that that dogs didn't do more than just bark. Did you restrain them or did they decide on discretion?

The dogs live in the fenced area with the male alpaca, so they do not have direct access to the female alpaca paddock. Our 350 pound llama protects the females.

A starter's pistol or CO2 pellet gun might be enough of a non-lethal shock to keep them away from your farm. The sharp sting in a backside and loud bang might remind them of the "threat" to their trespass.

Another non-lethal option is to replace the buckshot in shot gun shells with rock salt - which won't kill, but it will sting like the dickens. It's a great "memory aid" for coyotes, foxes and other predators who will learn quickly to stay away from your property.

I find out coyotes are most active from around 4 pm to about 4 am. Our current cats are now "indoor cats".

Funny, as I posted that comment my dog started barking and when I went to see what the fuss was about, there was an adolescent coyote 20 feet away, scampering into the bramble.