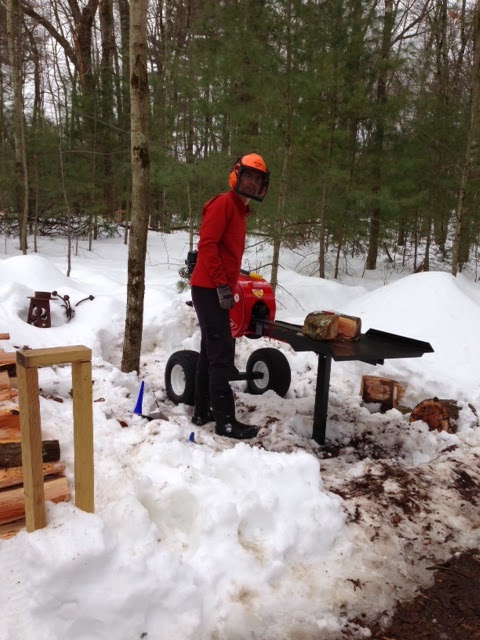 Last weekend I drove to West Bridgewater, MA and picked up a 500 pound SuperSplitter  (J Model 6.5hp Honda engine).  It’s now installed in the wood processing area with 10 cords of wood to be split on one side and 10 cords of self-built storage racks on the other.

Eastern Red Cedar - we never cut cedar, which is a slow growing resinous tree that lives for 800 years.   We have hundreds of cedars on the farm, some of which were planted at the edges of pastures in the 1800’s.   Cedar waxwings eat the berries and spread the seeds.   As our Revolutionary War era pastures returned to woodlands, the cedars were crowded out and shaded, weakening them.   Hurricane Sandy knocked over several old cedars and we split the fast burning wood to use as fire starters, moth repellant, and incense.

Red Oak - Hurricane Sandy damaged an enormous red oak on the southwest corner of the farm.   We cut it down to ensure a controlled fall and now have thousands of pounds of red oak to split.   I prefer white oak which is easier to split and faster to dry into firewood, but after 2 years of aging, red oak supports hot, long lasting fires.

White Oak - when we cleared land for our orchard, we harvested over 1000 linear feet of white oak, which I cut into 4 foot logs for Shitake growing.   There are a few thousand pounds of logs too heavy for mushroom farming so I’ll process those with the new wood splitter.

Maple - The largest tree on the property is an enormous maple (6 foot diameter trunk) that is near end of life.  We have a large number of birds that nest in old trees, so we’ve cut off the branches and left a snag for wildlife.   The photo above is splitting some of the maple branches.

Ash - Dozens of large ash trees have fallen on the farm over the past few years due to the Emerald Ash Borer.   Ash is an amazing wood since it burns without any aging.   We’ve cut up all the fallen ash and I’m in the process of splitting it with the new splitter.

Black Birch - In a particularly violent winter storm (we’ve had 15 storms this winter) a large black birch with shallow roots fell into one of our paddock fences.    We have a few thousand pounds of black birch ready to split - it smells like root beer (birch beer) when cut.

Poplar - poplar wood is soft, burns poorly, and smells like glue.    Poplar grows very fast and falls frequently.  We process all of our fallen poplar into oyster mushroom logs or chips for the trails.

My upcoming wood management projects include:

Collecting old fallen poplar (many tons to move with the Terex compact front loader) and chipping it into 5 strategically placed piles around the property for spreading on the mile of trails.

Cutting new forest paths to the mushroom farming areas so that I can move logs around with the Terex.

Clearing fallen branches from the trails for kindling

There is still 2 feet of frozen snow and ice crust on the ground, but I’ve been able to dig out the maple and ash logs that I cut before Snow-mageddon.   The new splitter, which is flywheel-based, does not have a delay to refill a hydraulic piston.   Thus far, I’ve been able to split 1 cord an hour instead of 1 cord per weekend!

I look forward to the wood management weekends ahead as soon as we have a thaw.   It was 3 degrees F this morning while I was shoveling manure.   Managing anything on a farm at 3 degrees F is challenging.

With all this work, you should get a small "retreat" cabin and offer Weekend "Getaways" to some of your friends and co-workers....Then have them get the full experience of rural living and help out with the chores :)

Your wood plan is impressive. I've learned a lot from this blog.