Meaningful Use and Certification Improvements

I wanted to make sure you were aware that the Centers for Medicare & Medicaid Services (CMS) today proposed a new timeline for the implementation of meaningful use for the Medicare and Medicaid EHR Incentive Programs and the Office of the National Coordinator for Health Information Technology (ONC) proposed a more regular approach to update ONC’s certification regulations.
Under the revised timeline, Stage 2 will be extended through 2016 and Stage 3 will begin in 2017 for those providers that have completed at least two years in Stage 2. The goal of this change is two-fold: first, to allow CMS and ONC to focus efforts on the successful implementation of the enhanced patient engagement, interoperability and health information exchange requirements in Stage 2; and second, to utilize data from Stage 2 participation to inform policy decisions for Stage 3.
The new regulatory approach to certification that ONC is proposing would allow for certification criteria to be updated more frequently under the ONC HIT Certification Program. This approach is designed to provide public input on policy proposals, enable our certification processes to more quickly adapt to include newer industry standards that can lead to greater interoperability, and add more predictability for EHR technology developers. We also anticipate that this new approach would spread out over a longer time period the certification requirements to which EHR technology developers have previously had to react.
More information is available at www.healthIT.gov/buzz-blog"

There has been some misinterpretation of this text, so it's important to clarify what it means.

This is NOT a delay of Meaningful Use in 2014 (Stage 1 or Stage 2).   All 2014 certification and attestation deadlines are still in force.

This announcement adds another year to Stage 2, delaying Stage 3 to 2017 and making Meaningful Use Stage 2 a three year cycle.

The federal government does things methodically.  Though it may seem that this decision is lower priority than addressing 2014 issues, it needed to happen now.  Since Marilyn Tavenner messaged at HIMSS that there would be "no rule making in 2013," the timeline established in previous regulations had Stage 3 beginning in 2016, which would have ONC and CMS releasing proposed regulations now.

The fact that today's announcement did not address 2014 issues does not imply that no one is listening to those concerns.  Some may complain that they were expecting lunch and dinner but only got lunch.  It's fair to say that lunch comes before dinner.

The second part of the announcement about certification is a good thing for developers of EHR technology.

ONC is starting a new iterative process of certification that will allow ONC to "telegraph the pass" as Acting National Coordinator Jacob Reider said today - giving developers advance warning of functionality that will be expected in subsequent iterations of the certification program, enabling feedback on such intentions very early, and facilitating adoption of new standards/new versions of standards.  Developers will be able to evolve their products as standards evolve, rather than maintaining alignment with old standards that are part of stale certification criteria.

In summary, today's announcement is a first step in the fine-tuning of the national healthcare IT timeline.  Stage 2 is now a three year cycle beginning in 2014, Stage 3 begins in 2017, and the certification program moves from a waterfall approach to an agile approach.   In the table below, the three's in the 2016 column become two's, without any changes to 2014. 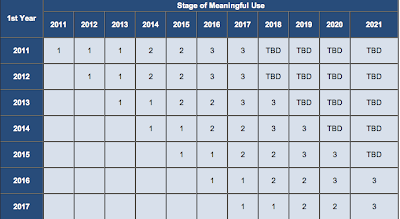 This is important progress and should be welcomed as a sign that HHS is listening.   There is still work to do and I look forward to continued refinements over time.
Posted by John Halamka at 5:35 PM

Does this change affect payments as well? If it moves to a 3 year cycle do you attest for all 3 yrs and get paid all 3 years or do you only get paid for 2 years?

Some are wondering if this means more $$$ would be paid out. My assumption is no but I haven't heard anything definitive.

The timing of funding does not change at all

Thanks for this! Saw your comment on the funding changes. I figured this does not change any of the incentives being paid out, but does it indirectly change the penalties? Does the delayed Stage 3 essentially mean that the penalties will not come as fast?