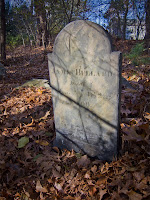 One of the great benefits of owning a colonial era property is that you never know what you're going to find.

He's buried in our backyard.

As I've written about previously, the town of Sherborn stored its gunpowder on the Unity Farm property in the Powder house from 1800-1857. The Powder House was accessed via Powderhouse Lane, next to the Bullard Family home at 33 Main Street.   James Bullard was assigned the role of Powder House keeper, which was especially convenient since the Powder House was about 100 feet from his back door.

The Bullard Family home is now called the Sherborn Inn and the Powder House has been dismantled, although the foundation is still visible and accessible via Unity Farm's Marsh Trail.

James was married to Mary Harding on November 9, 1786.

On the day of their 227th wedding anniversary I was cutting wood on Unity Farm's Gate Path.   The late fall sun shone through the leafless forest and reflected off a piece of bluestone in the forest.   I looked closer and found that the light was coming from James Bullard's gravestone, near one of our old pasture walls.

As I looked around the grave I noticed an old cedar with something hanging on it.  Above the grave, an old wooden snow sled, silvered and shrinking with age, hung from a branch.   There's no brand, no label, and no clear attribution on the sled.     Was this James Bullard's "rosebud"?  Was his gravesite located on his favorite sledding hill on the land behind his 1700's home? 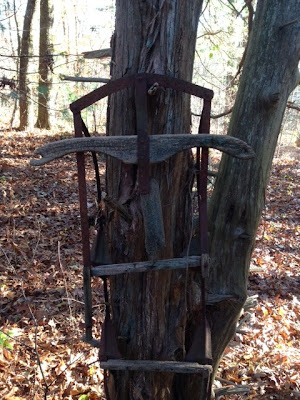 Mary Harding,  James' wife, died in 1796 at the age of 33 and is buried in the Plain Burial Ground in Sherborn.   James is buried on our farm under a mysterious gravestone in the woods, guarded by an old cedar supporting an ancient snow sled.

I'm not sure what it all means, but of all the Revolutionary War artifacts on Unity Farm, the grave of the Powder House keeper was not something I expected to find.
Posted by John Halamka at 3:00 AM

evocative imagery, but flexible sled concept was not invented until 1889.

All the ingredients for a mystery novel.