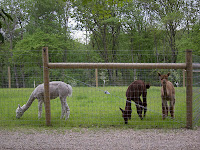 How did we adopt new alpaca?

In an unusual chain of events,  a leading alpaca breeder in Maine was the former editor of a healthcare IT magazine and knows me well.   When she heard about a family in Massachusetts trying to place their three alpaca, she recommended Kathy and me as caring adoptive parents.

We gently loaded the alpaca into a transport vehicle and drove them 20 miles from their current home to their new home at Unity Farm.

Since we're introducing new animals to an existing herd, we decided to quarantine them for 4 weeks in our pasture, away from the other alpaca.

They have their own loafing shed, hay supply, minerals, grain bowls, and half an acre of orchard grass to munch.

Our traveling large animal vet will visit them on June 5.  We'll update all their inoculations, do fecal samples for parasites, and begin injections of ivermectin as a preventive treatment for meningeal worm.

Since we had a 3 day weekend, we also aggressively worked on woodland management.   Now that the orchard has opened up the lower 5 acres of the property, I began hauling fallen trees to the woodcutting area and wood chip grinding area.

Saturday was devoted to clearing an old hickory tree that blew down in hurricane Sandy.  Hickory is the finest firewood available - easy to split, yields high heat, and burns cleanly.     I added half a cord of split hickory to our 5 cords of firewood storage.

Sunday was devoted to ash.  Over the past few years a virus killed many old ash trees and the emerald ash borer caused dieback of ash trees in New England.   Some of those trees have fallen and some are still standing, likely to fall in the next big storm.  I began the process of clearing ash and moving it to the woodcutting area for splitting.  Ash does not require aging and can be burned immediately.   We lit a roaring fire of freshly cut ash wood on Sunday night since the temperatures on the farm dropped into the 30's.

Monday was devoted to poplar.   Many of the poplars on the farm are 65 feet tall and are approaching an age when they are likely to fall in a storm.   Poplar is poor firewood and we generally chip it for use on our trails.    On Monday, I was spreading mulch on the Orchard trail, a winding path between the orchard and our stream.   I stopped for a moment to check email and received an important budget to review.   I walked to the house to view the spreadsheet on a larger screen.   While sitting at my computer, I heard a loud explosion from the lower portion of the property.   Everyone on the farm ran to discover the source of the disturbance.  What we saw made us turn pale.   A 5 ton poplar had fallen on the exact spot I was standing while spreading mulch.   It crushed a portion of the orchard fence and ripped down the gate, 50 feet away.    Can an email save your life?  On Memorial Day, an email saved mine.    It's hard to imagine an obituary that reads "John was standing in the forest when a 10,000 pound poplar spontaneously fell on top of him." 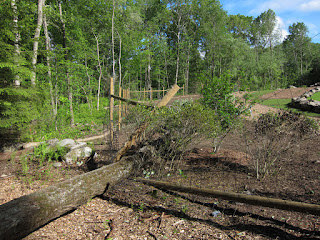 My wife gave me a large chainsaw for our 28th anniversary last year (the traditional gift), so we had the tools necessary to carefully cut up the 18 inch diameter trunk into 200 pound chunks which we carried to our grinding area.   We temporarily stabilized the fence (two posts were broken and one crossbeam was smashed.    At the moment, the orchard is still deer proof while we await permanent repair.

Finally,  Kathy and I finished our first 110 Shitake mushroom logs - 5000 holes, 30 pounds of mushroom spawn, and 10 pounds of cheese wax to seal the holes.     We can process about 300 pounds of oak per hour, which we did in the late afternoon on Saturday, Sunday, and Monday.     Now that the first 11 oak stacks are completed, each with a different sub-species of Shitake, we'll work on expanding the size of the stacks so that by the end  of June we'll have completed 220 logs - a total of 15,000 pounds of wood. 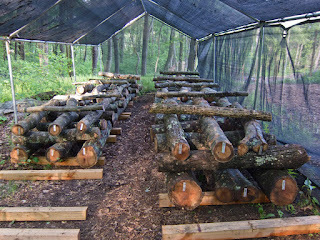 Luckily, next weekend we'll be moving our daughter into her own apartment at Tufts University.   After our farm workouts, hauling furniture should be easy!

So how does one carry "200 pound chunks" of poplar to the grinding area? Bobcat or other large machinery??

I move everything on the farm by hand with this metal cart which has a 700 pound capacity. As I age, a Bobcat is likely a good idea.

It always amazed me how one tiny little decision can change your life. Going to check your email, changed your fate.

Glad you are ok!