Saying Goodbye to my Father 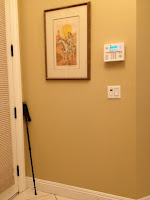 My father passed away this morning.   My mother and I were at his bedside telling him we'd be ok and care for each other.  He was 70.

My parents met when they were 17 and I was born when my mother and father were 19.

I've known him for nearly 51 years.

The community recalls him as the kindest most giving lawyer in Southern California.

To me he was a mentor, a friend, and an inspiration.

He told me a story about my early childhood.   When I was two years old, I was playing in the backyard of my grandparents home in Iowa.   I fell on grass and began crying.   It was not injured in any way.   He watched the incident and decided not to run over and console me.   Instead he let me brush myself off, realize that I could fall, and in a self reliant way recover from it myself.   Within a minute I was ok and back at play.   He taught me resilience by being a safety net but letting me find my own way.

In the entrance to my parent's home, there's a woodcut of Don Quixote.   Today, my father's unused cane leans against the wall.   I was struck by the resemblance of the lance held by the Man of La Mancha to my father's Leki walking stick.   Despite 23 years of multiple sclerosis, with the loss of walking and difficulties with activities of daily living, my father always dreamed the impossible dream.    He built a Japanese garden, he turned compost, he grew vegetables, he maintained the house, and continued to build/tinker until the end.

Some have commented that only a cruel god would afflict such a kind man with multiple sclerosis, myelodysplastic syndrome, and severe coronary artery disease.   However, my father was stubborn and met the adversity head on.   He refused pain medications for dental procedures and declined anesthesia for colonoscopies.   He made the best of every day no matter what cards life dealt him.

I will miss him but he will always be a part of me and inspire me to new levels of equanimity and endurance.

Goodbye Dad.  I love you.

Good Bye, John. We love you and you will be missed mightily by Bill and me.

Our thoughts and prayers are with you and your mom. Both of you surrounded him with love, gave him strength to endure and shared his passing. May you find peace and joy in all the shared memories.
Sent with our love, Lynn and John McCurry

May Peace be with you, your mother and family. I was sad to read of your loss, but happy to hear about your amazing father and his strength and how he passed on his wisdom to you growing up.

John, sounds like you have great memories of your father. Remember, your children are making those same memories with you. That is what hit me the hardest when my father passed in 2008. I do not have those great memories with him, but am trying to break that chain with my children. My heart and prayers go out to you and your family.

John - thanks for sharing your final days with your Father. You help and inspire others by sharing your life experience. My thoughts are with you, your Mother and family.


The memories and his imprint on you will last forever.

My best wishes to you, your mom, and the rest of your family.

My Condolences to you and your family

Judging by your post your Dad was a great man.

Condolences to you and your family. That's good you could be there, it was a little haunting but I was present for my father's death as well.

Thank you for sharing this most intimate journey any of us can make. What a good son you are. Your Dad sounds like he left abounding goodness behind him.

Sorry for your loss. He was still such a young man.

Thank you again. In the end, we as the survivors are fortunate if we can tell our parents that they have done right and that it is OK to let go and move on.
Letting go of a loved one is an expression of love.
Martin

Really sorry for your loss ! but Really great courage and share your emotion .. We can not countyour love with father with your true Love for hime !

Sorry for your loss. Your post is a warm and loving tribute.

I also send my condolences to you and your family.

It may be a little strange, but in a way, by sharing the personal aspects of your life, daily readers feel a close connection to you and your family. We are what you might call an extended electronic family who morn with you today.

My prayers are for comfort and peace for you, your mother and the rest of your family during this time.

John - I am wishing you and your family peace and comfort during this most difficult time. Your father's impressive spirit and generous heart surely live on in you. I have commented on many of your posts as I *always* learn much from you. Among the best lessons are these recent posts about compassionate care and saying goodbye with grace. You have many gifts. Thank you.
~JP

Sorry to read about your loss John. May peace be with you and your family. Judging by your posts, he led a very inspiring life, may his soul rest in peace.

Dr. H,
What a kind and moving tribute to your father. My Dad also had MS and he lived for 60+ years after being diagnosed shortly after his college graduation. I think our Dads would have been pleased to know one another and perhaps they now do ... my prayers for a time of peace and healing for you and your family.
Karen Hollingsworth, RN, MS, CPHIMS

Dr. Halamka:I just spent my weekend on Cape Cod doing the 3-day 50 mile walk for MS and I remembered that your Dad had MS.

We had glorious weather this year. The walk started in 2002 and, although I didn't have a connection to MS that year, I got involved to celebrate a 9-11 birthday.

Perhaps you will consider joining us next year or maybe give a speech? I am always stunned by how young so many of the MS patients are and amazed by the sheer determination of some of my older friends such as Sarah who will turn 70 next year and she has walked the trail every year since 2002.