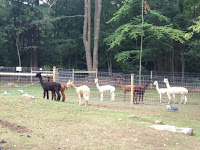 I recently spoke with the owner of a 200 acre farm where he and his wife run a CSA, breed goats, and raise cattle.   As a vegan, I'm always interested in how farmers who raise livestock for meat address the issue of the emotional bond between the caregivers and the animals.

One common theme I've heard is that farmers and their families do not name animals they intend to sell or process for meat.    It's really awkward to respond to a child's innocent "what's for dinner question" with an answer like "Spot" or "Buddy".

As vegan/vegetarian farm, we have no plans to eat any of our animals and each of them is named for their unique personal characteristics.

Our llama is named "Black Orchid" because of her dark fur and elegance.

Our female alpaca are:
Mocha - she's a chocolate brown color and always interested in delectable foods
Daisy Mae - she's sweet, petite, and good natured
Ella Mae - she's the kind hearted mom of Daisy
Tinkerbell - she's light on her feet and always dashing about
Persia - she has alluring eyes and dark luxuriant lashes that make her look like a mysterious female from the East

Our chickens are:
Sunny - she's our gold colored buff orpington
Chocobo -  she's named after a character in "Final Fantasy"  that looks like a yellow/gold chicken, perfect for a buff orpington
Midnight - she's our jet black Jersey Giant who is highest on the pecking order
Pingu -   her name Japanese for "penguin" which is fitting for a black Jersey Giant with a touch of white
Snow - she's our white, fluffy Brahma
Velma  -  she's our smartest chicken, a Brahma, who is named for the Scooby Doo character Velma Dinkley
Chipmonk - she's our Ameracauna with stripped coloring just like a chipmunk
Zephyr - she's our breezy barnyard Ameracauna wanderer who is always running from one place to another
Clover  - she's our white Ameracauna who enjoys rolling in the grass
Silver  - she's our shimmering white Ameracauna with a heavy, thick neck
Terra  -she's  our first egg layer who enjoys her earthy dust baths
Rainbow  - he's our multicolored Ameracauna rooster
Lucky  - he's our rescued rooster who now spends his day in the company of 11 female chickens instead of being prepared for Sunday dinner

Our Great Pyrenees Mountain dogs are Bundle and Shiro.   Our cat is Lily and we may adopt two rescue cats - Toby and Blessings.

Admittedly the Guinea Fowl are hard to identify separately because they are all genetically related.   We do have 2 whites, 7 blacks, and 9 grays.   One of the blacks is Piebald.

Whenever I'm running through an airport (most are vegan food deserts), I'm often presented with food choices like chicken caesar or some kind of poultry nugget.     Not only does my commitment to veganism keep me from such foods, but the thought of eating Sunny, Chipmonk or Lucky is unconscionable.

Naming the animals is one of the great pleasures of life on the farm.    Every day when I'm moving hay, filling water, and shoveling manure, I can address everyone by name, wishing them good morning or offering words of encouragement.