Building Unity Farm - The Guinea Fowl Who Lost His Mojo 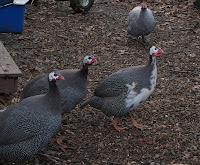 Running a farm with 50 animals is like having 50 children.   There are going to be bumps and bruises, stumbles, and occasionally serious injury.

Last week, one of Guinea Fowl, named Piebald (because he's a patchy blend of black and white) flew into the male alpaca area which is guarded by our Great Pyrenees Mountain dogs, Bundle and Shiro.   Normally our dogs ignore our birds, since the dogs have lived with the poultry for most of their lives.  Piebald ran around the inside of the pasture fence and his fluttering attracted the dogs.  They wanted to "play" with Piebald by "fetching" him.    Within seconds of this happening, I ran to the pasture, body slammed the dogs to the ground with a sharp NO, indicating that eating a fellow citizen of Unity Farm is unacceptable behavior.

My wife picked up Piebald and began walking him back to the coop.   A few of his tail feathers were missing, his head had a few spots of blood, and he looked a bit traumatized but otherwise intact.    On the way back to the coop, he jumped from her hands and ran straight into the forest surrounding our farm.    Kathy and I spent an hour looking for him to no avail.   As darkness fell, we suspended our search.

The next morning he reappeared in the coop,  looking out of sorts.  That afternoon he disappeared again and spent the night in the forest.

The following day, he reappeared in the coop but his affect was very submissive.   Previously Piebald was high on the pecking order.   Now, he was being pecked at by his subordinates.  He lost his mojo.

He spent the day running away from the other Guineas and losing various pecking order battles.

His wounds had healed and he was eating/drinking vigorously.   He stayed in the coop overnight but slept with the chickens.

The next day he began cruising the property with the other guineas.   He regained his upright posture and assertiveness.

Today he's been leading the pack once again, completely comfortable with being a leader of  Guineas.   He's regained his stature.

Every day is an adventure at Unity Farm.  You never know what interpersonal dynamics will develop with the alpacas, llama, guineas, chickens, and dogs.   You never know who will squabble, who will have an injury/illness, and who will develop new behaviors.    If it wasn't for the rigors of being a CIO, I could spent the day watching the events of the barnyard - far more interesting than Fox News or CNN.

We've had life and death on the farm, sickness and health on the farm, joy and sorrow on the farm.    At the moment, everyone is healthy, happy, and knows their place in the pecking order.

As we prepare for the Christmas on the farm, it's good that our citizens are all at peace in their community.
Posted by John Halamka at 3:00 AM

Perhaps the most cognitive dissonance I've ever experienced reading this blog was the mental image of you, John Halamka, body slamming anything to the ground. I've no doubt that this is the correct way to redirect the Great Pyrenees in flagrante, but I must have reread that line three times before I believed it!

Are you sure the Piebald anecdote isn't an allegory for one of your employee's who has been disciplined for security laxity?