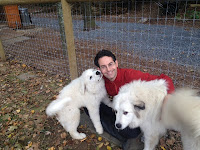 No farm can be complete without dogs and cats.

In the 1980 and 1990's, my wife Kathy raised Chow-Chows professionally.   We have fond memories of Syrah, Callie, and Thor, our champion dogs who all passed away from old age.

My daughter, Lara, loves Alaskan/Siberian Huskies and she learned to mush two Summers ago during a trip to Alaska.

When we planned Unity Farm, we knew we needed livestock guardian dogs.   Chow Chows guard their families but are not known for guarding other animals.   Huskies eat other animals.  We considered  Komondors, Anatolian Shepherd Dogs, and Great Pyrenees.  After significant research and visiting local farms, we selected Great Pyrenees.

We chose a pair so they could effectively work together against predators and keep each other company.   Bundle (short for Bundle of Joy) is our 10 month old female.  Shiro (Japanese for white) is our 12 week old male.   We do not intend to breed them and by agreement with her breeder, Bundle was spayed two weeks ago.    Shiro will be neutered at the appropriate time.

They are the best of friends and sleep together during the day, play together all afternoon and guard together at night.    Bundle is 60 pounds (the runt of her litter).  Shiro is already 30 pounds and per canine growth charts he will be over 90 pounds at maturity.

They guard the male alpacas - Stanley, Domino, and Midas.   Bundle has already chased away one coyote.    Shiro has lived with our Alpacas for over a month and he's bonded with them.   The only challenge he's had occurred when he squeezed into the female pen and was stepped on (accidentally) by our 300 pound llama.   Other than a small corneal abrasion (which we treated with tobramcyin opthalmic drops), he suffered no ill affects.

The only downside to Great Pyrenees is that they are very protective of their food and the two dogs have to eat separately to avoid squabbling.

Every night I take them for a long walk outside of the paddocks, exploring our forest filled with deer, wild turkeys, foxes,  owls, and really great wilderness smells for dogs.

Bundle and Shiro are true farm dogs, rolling in hay, playing in mud, and frolicking with chickens/guineas.   They have not shown aggressive behavior toward any prey animal, but they are quite aggressive with predators.

Although a traditional barn should have barn cat to control the rodent population, our two cats live inside.   Tigger and Lily are feral strays that we adopted 12 years ago.   At this point they enjoy lying in the sun, chasing dustballs, and munching kibble (to the extent their remaining teeth allow).    Tigger is a 16 pound male, and Lily is 10 pound female.    He enjoys as much petting as his humans can sustain.  She enjoys hunting, licking her humans, and giving gentle love nips.

Both are healthy and happy in their "retirement" as geriatric cats.

At the moment, the barn remains rodent free because we've stored all our grain in sealed aluminum containers.   I'll write about our hay, grain, and other food management next week.

As is generally the case at Unity Farm, our dogs and cats live in harmony with their surroundings and the other animals.   They all have jobs to keep them busy, and our dogs partner with us to manage the livestock, keeping them safe.