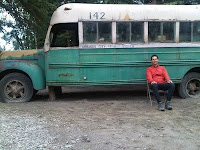 I'm back from Alaska and I'll post several blogs about my Healthcare IT and personal experiences in the 49th state.    Sorry for the gap in blog posting last week.  Per the photo to the right, I was "Into the Wild" with my wife and daughter, celebrating my daughter's graduation from high school, off grid.

Alaska faces many healthcare challenges given its large area (663,268 sq mi) and population of 710,231 residents (as per the 2010 US Census), approximately half of which live in the Anchorage metropolitan area, making Alaska the least densely populated state.   Roads are limited, making boat and small plane the only means of transportation to many locations, especially in the western portion of the state.

The geographical challenge of delivering such widely distributed healthcare makes it a natural location for telemedicine,  much of which is ably overseen by Stewart Ferguson CIO, Alaska Native Tribal Health Consortium.

The business case is simple - provider travel to remote villages and patient commuting to downtown clinics is expensive for providers and patients.

Because telemedicine has become part of the culture of Alaskan care delivery, healthcare information exchange is likely to be very successful.  When a patient is referred to a specialist, lifetime medical summaries should be sent before the consultation.   When the telemedicine encounter is done, a summary of the evaluation should be sent back to the primary care giver or health aide in the village.

Alaska has what I consider the perfect alignment of incentives needed for a successful HIE
a.  Complete support of all payers and providers that HIE (coupled with Telemedicine) saves money by reducing travel
b.  A universal expectation by providers and patients that HIE will occur following each encounter
c.  A population of patients who understands the need for HIE and supports a simple consent model (opt-out)
d.  Government support for HIE with strong public-private governance and delegation of HIE operations to a multi-stakeholder non-profit, the Alaska eHealth Network (AeHN) a  501c3 Alaska corporation organized and managed by Alaskans.
e.  The stakeholders chose a single vendor, Orion, to provide the backbone which will connect all their EHRs.

A network of networks approach makes great sense for a state with regional centers of excellence and highly distributed broadband like Massachusetts.  Alaska has some broadband but relies on satellite and microwave connections, which are limited in bandwidth and very expensive.   Alaska does not distribute IT staff and infrastructure support to distant villages.  Thus, for Alaska, a single network and a centralized clinical data repository supporting:

The folks in Alaska working on HIE, led by Wiiliam Sorrells, are highly motivated, have done a great job with education/communication, and share a common vision.

I predict that Alaska will become one of the most successful HIEs because of its clear business case, alignment of incentives, and broad stakeholder engagement.

I look forward to working with my colleagues in Alaska as we all develop the Nationwide Health Information Network, connecting all the successful state HIEs together.
Posted by John Halamka at 3:00 AM

It's interesting, in Canada we tend to piggyback our northern territories off their provincial neighbours to the south, when in reality, the business case for the territory shares more with the northern province, and less with the highly populated strip of cities along the 49th parallel.

Which is sort of what happens in the end; but I think the geopolitical become an impediment.