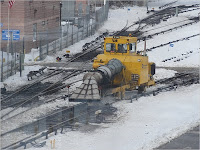 In New England, we all have snow on our minds.

While shoveling the 7 feet of snow we've had in Wellesley, I've thought there must be an easier way - why not a small portable jet engine to just blast your driveway clear?

Although not yet practical for domestic use, I found a cool technology used by our railroads in the northeast - the jet engine snow blower.

The Snow Jet is a snow blower made from the engine of a jet mounted on a railroad car.  The Metro-North railroad uses 6 of these (pictured above) to clear the snow on commuter rail lines around New York.

The start up of the engine requires finess to prevent excess fuel in the nozzle from erupting into a twenty foot flame. The cab controls include movement up/down and right/left.   I'm told that the engines make so much noise that snow clearing near residential areas is banned from late evening until the following morning.

There is a certain amount of danger in operating the jet engine powered snowblowers. Along with melting and blowing snow they will also blow the loose debris out of the tracks and there's nothing like flying steel and concrete to ruin your day.

A jet engine for clearing snow - that's cool!
Posted by John Halamka at 3:00 AM

For your personal use, Mr. Kai Grundt of Muskoka, Ontario, Canada, might supply plans for his home-made 450 cu-in, Chevy engine-powered snow blower:

I'm still fascinated by the 20-foot-long flame eruption. I'm thinking the finesse would be in getting that flame with every start up! But, then again, I'm fond of fireworks and such. Still, this is right of the same line of thinking as those guy who built vehicles around surplus jet engines and took them out to the Bonneville Salt Flats to set world speed records.