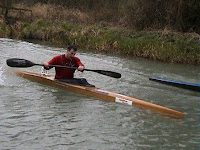 During the Summer, I kayak the Charles River each evening using performance and fitness kayaks. Depending on wind and weather conditions I'll chose the Epic 18X (a fast, stable sea kayak optimized for ocean racing), the Epic V10 Sport (a faster, moderately stable surfski) or the Epic V12 (the fastest, less stable surfski).
However, I've not ever tried a K1 racing kayak, considered the boat of elite, highly advanced paddlers that is so unstable, you must keep paddling to keep it upright.
One of our BIDMC IT managers, Tyrone Dell, trained for the 1992 Olympic kayak team and he still paddles his Cleaver K1 from that era. Of interest, the boat was made for John Long, one of the legendary rock climbers of our era and the first person to free climb El Capitan in a day. Ty and John kayaked together in Marina Del Rey during the same years I lived in Southern California. Small world.
Ty generously offered to teach me to paddle his K1.
Last weekend, we drove to Hingham, Massachusetts and launched our boats in the calm seas of the inner harbor.
How'd it go? Here's a YouTube video that illustrates the challenge.
Over the course of two hours, I progressed from 10 feet to a full quarter mile before flipping the kayak into the harbor.
The water was 62 degrees and the winds were calm, so my Hydroskin pants and Kokotat paddle jacket kept me warm during my frequent swimming experiences.
When a K1 flips, you cannot get back into it. You need to swim to shore, kayak in tow, empty it out, then reenter. Ty did a marvelous job of keeping me stable until I could balance on my own and begin paddling.
At this point, I fully understand the challenge of using a K1 - it's remarkably fast, but so tippy that rotation of the hips, shoulders or neck results in a swim. I now know how to balance, how to make slow/smooth strokes, and how to achieve the focus needed to keep the boat afloat.
Next Summer, I'll plan on taking a K1 such as the Volcan from Simon River Sports (available for rental at Charles River Canoe and Kayak) to Walden Pond where the sandy beach, clear water, and lack of vegetation will give me a great training ground. The advantage of mastering a K1 is that any style of kayak feels like a barge by comparison!
Posted by John Halamka at 3:00 AM

Life is a journey
What you have gone through can help others
Please share at WikiJourney
http://wikijourney.org

Found this post by accident. Interesting story. I find many men have a hard time learning due to an interest in "going fast" right out of the block. Women on the other hand (with a lower center) seem to concentrate on technique more but learn balance faster. But, once you have it the balance is forever. The Struer Cleaver X in wood is fantastic boat, I own one as well. Rob in CT.