If It's Tuesday, This Must be Tokyo 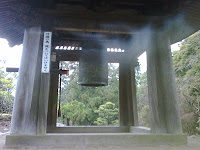 A quick but eventful trip to Japan from March 3-7. My trip was funded by the University of Tokyo as part of an academic visit and not related to any company or product.
Two hours after landing in Narita, I had dinner with my hosts in Tokyo at La Rochelle, a French-Japanese fusion restaurant run by Iron Chef Hiroyuki Sakai . Chef Sakai prepared several novel vegan dishes for me using fresh Japanese mushrooms and vegetables.
The joy of the 14 hour time difference between the US East Coast and Japan is that I can work the Japanese day and the Boston day in the same 24 hour period. After the welcome dinner, the Boston business day began and I worked on several projects related to Meaningful Use- Federal, State and Local.
The morning brought 12 hours of lecturing, meeting, and greeting with Japanese healthcare policy and technology experts, discussing the Japanese version of the healthcare stimulus plan. (250 billion Yen, which is approximately 2.8 billion dollars). Critical issues for the Japanese are data security, data sharing consent, standards, reducing competitive disincentives to healthcare information exchange, and lack of EHR adoption among ambulatory clinicians.
After a great conference day, I said goodbye to my hosts and had 36 hours on my own before my flight left. My evening was filled with collaboration among members of the HIT Standards Committee to finish the comments on the Interim Final Rule (will be my blog tomorrow) and putting the finishing touches on a Health Affairs article (it seems to be a yearly tradition that I go to Japan and spend my nights writing a Health Affairs article for the annual Healthcare IT issue). At 7am I left the hotel and began the adventure I described in Friday's blog - a traverse of the Takao ridges. A truly remarkable experience.
In case you find yourself in Tokyo, here's my brief description of the hike.
From anywhere in Tokyo, take the Yamanote line to Shinjuku station. From there, transfer to the Keio line, and take a limited express bound for Kitano. Once there, take a local bound for Takao-san-guchi. Exit the station to the right and you'll find yourself at the the trailhead. There are 6 possible trails up Mt. Takao. I recommend trail #1 - the longest, most scenic and less traveled. However, Mt. Takao is a very popular destination, so less crowded is relative. The good news is that few people travel the ridge beyond Mt. Takao. After reaching the top, go to the East end of the summit and take the trail to Shiro-yama, the next summit. At that point, the crowds disappear. The trail to the next peak, Kagenobo-yama is an amazing ridge filled with cedar trees (sugi). The trail to Meio-toge is isolated, wild, and follows the track of the Japanese version of the Appalachian Trail (Kanto Fureai-no-michi). The final peak is Jimba-san and its famous war horse statue. A descent via Wada pass to the Jimba Kogen-shita bus stop, a bus ride on the #32 and #5 buses to Hachioji, and a train from either Keio or JR Hachioji station to Shinjuku completes the day. Book time for the hike is 5-7 hours (plus 3 hours for train/bus travel) and the distance covered is 12 miles, with a few thousand feet of elevation gain.
This morning, I checked out at 6am, took the Chuo line to Shinjuku, stashed my bags in a locker (fully electronic - you are given a PIN number to open the locker instead of a key), took the Yamanote line to Shinagawa station, then the Keihin Kyuko Rapid Limited Express to Miura-kaigan on the Miura Peninsula, an area of wide sandy beaches, rocky coastline, and a great old lighthouse. After walking the Peninsula, I took the Zushi line train to Jimmu station and hiked the temple route (the photo above), passing plum blossoms in bloom, Jizo statues, and the peak of Mt. Takatori. I was completely alone the entire trip.
From there, I took the Keikyu line back to Shinagawa, the Yamanote line back to Shinjuku, picked up my bags, and took the Narita Express to the airport, changing from my hiking clothes into a suit while on the train. I just landed from my 18 hour commute back to Boston.
In all my travels above, a rudimentary knowledge of Japanese really helped, since most signs in the wilderness are only in Japanese, such as this one which indicates the way to the train station (good luck figuring it out since both West and South seem to the be right answers). How did I get by? The following expression:
Sumimasen (fill in the name of where you want to go) wa doko desu ka?
which translates into
Excuse me, (placename) it where is?
This saved the day many times, since maps, signs, and guidebooks were often wrong.
The Japanese people are gracious, helpful, and eager to provide directions to foreign travelers.
I succeeded in my quest to find the road less traveled. Of course, the fact that it was 38 degrees, raining and trails were ankle deep with mud may be have been a disincentive to other travelers.
A great trip! Thanks so much to my friends in Japan who made it happen.
Posted by John Halamka at 3:00 AM

Would you say that the Japanese are ahead or behind as far as the EHR/EMR adoption is concerned?

Great post, John. Shinjuku station is one of the great examples of peace at work among humans (my studied opinion, of course). Millions pass through the station every day with barely a shoulder bump, all moving more quickly than the T into Boston. And I am hungry for that welcome dinner they served.