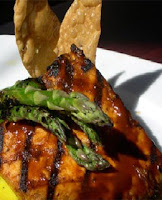 Over the past two weeks I've been traveling up and down the Northeast Corridor from Boston to New York City to Philadelphia to Washington for various meetings related to healthcare IT. When I arrive in a city and check into a hotel, I Google "vegan" followed by the city name. I scan the Google map that appears and walk to the most appealing vegan restaurant nearby. Here are a few of my recent finds:

Philadelphia
Mi Lah is a great mix of oriental vegan foods from Cambodia, Japan, and Thailand as well as classic ethnic dishes such as Greek butternut squash moussake and African peanut stew. I had the Cambodian Amok with spinach, eggplant, and tofu in coconut lemongrass sauce. Great service, a warm atmosphere, and an all vegan menu.

Horizons is an internationally famous vegan restaurant specializing in Mediterranean flavors. I highly recommend the tempeh and seitan dishes.

I recently had a wonderful evening with Dr. Sidney Zubrow and his team from Philadelphia Hospital. We dined at the classic steakhouse in Philadelphia, The Prime Rib. A steakhouse for a vegan? Surprisingly, steakhouses such as Morton's, Capital Grille, and The Prime Rib have great vegan side dishes including fresh broccoli, green beans, roasted tomatoes, spinach, and roasted potatoes. I order everything steamed and without butter or any sauce.

I've not had much experience with Mezzes, small plates of Eastern Mediterranean food (similar to Spanish Tapas). Zaytinya is a fabulous restaurant with many vegan entrees. I had great humus, eggplant, couscous, and mushroom dishes. The staff is very vegan friendly and even brought me fresh cucumber slides for dipping instead of pita, which is made with dairy.

If you find me in a vegan restaurant sitting alone, you'll notice that I'm photographing every course on my Blackberry. I email them to my wife in real time, so that we can enjoy dinner together, even when I'm hundreds of miles away.
Posted by John Halamka at 3:00 AM

Grezzo is an great choice in the Boston area (North End)

On Earth Day this year, I FINALLY made the switch to vegetarian - no meat since that day. My goal is to go Vegan - but I really don't know how. But I'm looking at getting started kits and other Internet resources, and hopefully, I can gradually get to that point. I don't want to switch overnight, because I think the change would be too abrupt, and I am extremely busy, so to find time is a challenge. Any good referenced people have for someone like me would be much appreciated!

Woops! I meant to say "Any good *resources* that might be helpful to people like me will be much appreciated!" Thanks...

Rennasauce - I've posted a blog about my favorite vegan resources.

See Dr. McDougall online for all the vegan recipes you'll ever need and great info on vegan lifestyle, too. Also, New York has a great vegan restaurant, which takes vegan dining to a higher level -- Candle 79 (delicious but not necessarily low fat!)