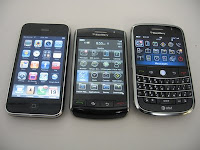 This week I had the opportunity to carry the ultimate geek utility belt - an iPhone 3G, a Blackberry Bold (AT&T) and a Blackberry Storm (Verizon). I tested all three devices in parallel for emailing, web browsing, and usability. Here are my first impressions:

The Bold has a bright 2.8-inch glass LCD screen with 480 x 320 resolution (same as the iPhone 3G) and is very easy to read. I started using bifocals last week and I really appreciated the Bold screen as compared to my Curve. The increased graphic density makes a big difference for the web browser since it's now possible to render an entire page on one screen. An easy to use zoom feature and scroll bars make browsing much more "desktop like" than previous Blackberries. The HSDPA 3G wireless over AT&T is fast and the coverage in Boston is quite good. The WiFi linked easily to my hospital infrastructure. The Bluetooth bonded seamlessly with my Prius. The only downsides - the battery life of the Bold is about a day and half, compared to 3 days on my Blackberry Curve. I could not find a way to turn off the 3G and use EDGE only. The QWERTY keypad is very similar to the 8800 series, without the generous key spacing of the Curve. I thought this would be a problem but after a few minutes of typing, I adapted and was able to type at my usual 60 words per minute without errors.

The Storm has a bright 3.25 inch glass touch screen with 480 x 360 resolution and tactile feedback. The entire screen is a mouse button that depresses but since your finger only contacts a small portion of the screen at time, your brain believes that the screen is a push button under your finger. The on screen keyboard is a full QWERTY keyboard when the device is tilted horizontally. When you hold the Storm vertically, it displays a "SureType" keyboard - the same doubled up keys found on the Blackberry Pearl. They question that I'm sure everyone is asking - was the typing experience on the Storm better than the iPhone 3G? The answer for me, is yes. My brain wants a key to click when I push it. Even though I really like the engineering of the iPhone screen, I have not achieved better than about 80% accuracy at 60 words per minute. With the Storm in full QWERTY mode, I easily adapted to the touch screen for typing. "The Quick Brown Fox Jumped Over the Lazy Dogs" actually appeared as typed, time after time.

In general, I found the Blackberry Storm easy to use although the multiple buttons on the case made navigation less obvious and elegant than the iPhone. The Storm has EVDO but no WiFi. For me, the WiFi is not a major need since most airports charge for WiFi and I prefer wide area networks. I've heard others complain about the lack of WiFi.

I'm sure many will ask - is the Storm an iPhone killer? I think this question is just as inappropriate as is the iPhone 3G a Blackberry killer?

They are different devices with different purposes. The Blackberry Storm is an email device that includes a great screen and a virtual keyboard with tactile feedback. The iPhone is a small computer running numerous lifestyle applications and an email client that is not optimized for high volume email use. They are both excellent devices for their respective niches.

What am I going to use? As with every technology this question needs to be answered with a specific set of requirements in mind. I need to email 21 hours a day while walking, commuting (only at stoplights), while in meetings, and while in airports. Although I really like the idea of touch screens and believe the next generation of handheld computers will focus on touch screen user interfaces, I still prefer the Bold's keyboard which is easier to use, faster, and more accurate for on the go typing than the Storm or the iPhone.

Next week I'll handoff these devices to my staff for testing and we'll see how they work for others with different requirements.
Posted by John Halamka at 3:00 AM

Can Your IS Helpdesk get a hold of these devices for testing?

Thought you might enjoy this review of the Storm which wasn't as favorable:

I have been fortunate to be carrying an iPhone now for a few months. It is an amazing device, and I must say that I am from a younger generation, not effected by any bias towards physical keyboards.

I am a Finance Manager for a hospital system, and I have found the iPhone to be a computer, reaching beyond the bounds of typical mobile resources with fantastic application resources.

I am sure that you have had requests for iPhones to be used on your wifi network. We have physicians here who have requested this as well -- and our organization has now had to begin to support Macs as well due to new physicians requesting assistance from our IT department on getting them hooked up on our network (access to internal resources -- Sorian, intranet, EMR's, et cetera).

I also have a family member who has the role of CIO at a very large Arizona hospital who just left RIM due to the power and ease of use of the iPhone.

I find it very interesting that Apple has begun to creep into health care on a broader scale without having to push it at all.