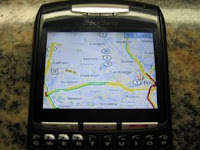 As readers of my blog know, I drive a Toyota Prius Hybrid which includes built in GPS navigation and Bluetooth links to my Blackberry. I drive about 30,000 miles a year to customer sites and to various speeches throughout New England. The challenge in the Boston metro area (and in most metro areas) is that a GPS navigation system is only one small part of the puzzle. Traffic congestion can be so bad that a 5 mile commute can take over an hour. On December 21, traffic in the Boston area was so bad that many folks took 5-7 hours to go 10 miles from downtown to the suburbs. That night I commuted from Washington DC to Wellesley in 6 hours simply because the airport is directly connected to the Mass TurnPike via the Big Dig, avoiding all congested side roads.

Every morning I need to decide which route to take to the office, guessing about traffic congestion points based on radio news reports that are often wrong or not current.

This morning, I downloaded the application from Google to my Blackberry 8707G while driving and instantly got a map of all traffic congestion points in the Boston area. I made it into the office in record time. I took a photo (above) of my Blackberry running the application. You'll see traffic patterns in green, yellow and red. Congestion points are Route 93 and the intersection of Route 128/Mass Pike.

The application is a relatively thin client - it took about 1 minute to download and includes live traffic updates for 30 major US metropolitan areas, movable maps with satellite imagery, directions, and business locations. Interactive maps let you zoom and move in all directions so you can orient yourself visually.

I look forward to the day when the Prius includes this functionality, but for now, Google Maps with Traffic for Blackberry will save me up to an hour a day, making me more productive.
Posted by John Halamka at 7:25 PM